Kid Ninja
Goemon is the titular protagonist of the long-running Ganbare Goemon video game series, made entirely by Konami's employee Ebisu Etsunobu and referred in North America and PAL region as the same title or Mystical Ninja. He is a hot-blooded man of feudal Japan (Edo or Tokugawa period) who has a strong sense of justice and can right whatever the wrong thing there is at front of him. His weapon of choice he primarily uses is as variety of smoking pipes. Also, he has several aliases outside Japan, such as "Kid Ying" in North American SNES release of The Legend of the Mystical Ninja and correctly translated to Goemon himself in North American versions of both Mystical Ninja: Starring Goemon and Goemon's Great Adventure. But in the future, his descendant is known to be by the same name.

In anime, he is voiced by Yasunori Matsumoto in Japanese version and Vic Mignogna in English version.

Though in the anime, he is given a sweeter caring outlook instead of his very hot-blooded mood during Edo peroid. But in video games, he does as always itching for a battle. He is also known for his strong sense of justice that he will become a noble thief.

In early entries of the titular video game series, like the original Mr. Goemon, Goemon is portrayed as becoming more chivalrous and doesn't smile very often as in later installments due to comparison. At the start of The Legend of the Mystical Ninja, he appears to be more of a standard hero, beating the evil threats of Edo period instead of getting anything from the rich ones. Although he had many samurais and ninjas as his enemies chasing him, they are immediately more often the main antagonist's minions. The Lord and Princess Yuki now take a look at him in a better way, saw by their apology in Ganbare Goemon! Karakuri Douchu. In few N64 video games, anyone that resemble his former foes do in a friendly way to him. So this change has been found in Bouken Katsugeki Goemon, where he is not a thief anymore.

Goemon appears in Super Smash Bros. Ultimate as a DLC Mii costume for the Mii Swordfighter.

Goemon and his whole gang. 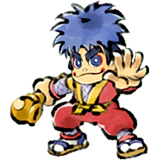