Toying with his foes.

Gogeta was the result of the Saiyan warriors Son Goku and Vegeta IV successfully performing the Fusion Dance. Vegeta and Goku usually fused into Gogeta to counteract a significant threat, as Gogeta's power exponentially surpassed the sum of his parts.

He is voiced by Masako Nozawa and Ryō Horikawa in Japanese, and by Sean Schemmel and Christopher Sabat in English.

After Goku successfully defeated the first form of Janemba, he struggled to defeat the demon's second form, even with help from Vegeta. Seeing no other option, Goku proposed they try using fusion and though Vegeta didn't like the idea at first, he agreed.

However he failed to do the technique exactly right with Goku, resulting in the two of them fusing into the short, weak and obese Veku. He was, obviously, no match for Janemba and was forced to run from the demon's assault for thirty minutes, stumbling around and farting in defense. Just as Veku was cornered and about to be finished off by the demon, the fusion time ran out and Goku and Vegeta defused. After an hour, they attempted the fusion again, while Pikkon distracted Janemba and succeeded, fusing into the powerful Gogeta. Demonstrating his great strength, the fusion easily defeated Janemba and destroyed him with the Starbust Breaker attack. As the negative energy that gave birth to the demon dissipated, the ogre, Saike, was left behind. Upon making eye contact with Gogeta, the ogre ran off in fear of the mighty warrior, which made him chuckle, before he defused back into Goku and Vegeta.

While Goku and Vegeta left Frieza to deal with Broly, they and Piccolo were stratagizing a way to defeat the mindless Broly. Goku and Piccolo performed the Fusion Dance concept to Vegeta. The two Saiyans failed it two times (creating Veku and the scrawny version). They've succeeded on the third attempt and returned to the fight (saving Golden Frieza's life), Gogeta and Broly instantly clashed with Gogeta holding an edge when he turns Super Saiyan (while managing to acidentally rip apart the timespace continuum in the process). Gogeta was forced to assume Super Saiyan Blue to completely dominate Broly at full power and almost killed the latter with a Transcendant Kamehameha Wave, if Cheelai hadn't used the Dragon Balls to save Broly's life at the last few seconds.

Gogeta stops Frieza from destroying Cheelai and Lemo's spaceship, the space tyrant retreats and promises to return and wreak vengeance. Gogeta presumably defuses after this, since only Goku visits Planet Vampa to commend Broly for his potential (whilst becoming friends in the process).

After Goku couldn't beat Omega Shenron, despite being in Super Saiyan 4 form, Vegeta who just became a Super Saiyan 4 thanks to Bulma's Blutz Wave machine suggested they try using fusion and Goku found it funny he was the one suggesting it. While Gohan, Goten, Trunks, and Majuub fought Omega Shenron to keep him busy, Goku and Vegeta performed the Fusion Dance, becoming Gogeta once again.

Now in Super Saiyan 4 form, Gogeta was easily able to fight the united Shadow Dragon, even toying with Omega Shenron and eventually taunted him to the point that he used his Negative Karma Ball to try and destroy Earth. Gogeta combined the ball with some of his own positive energy as he kicked it away into the atmosphere, causing the entire ball to change into positive energy. It resulted in a nuke-sized explosion, which reversed all the negative effects the Shadow Dragons had caused to the Earth. Eventually Gogeta blasted Omega Shenron with his Big Bang Kamehameha, forcing him to revert back to Syn Shenron. But as he prepared to finish the Shadow Dragon off with another attack, the fusion time ran out early (it only had been 10 minutes or 15 at the most). This was because of the enormous amount of power the Super Saiyan 4 form used and Goku and Vegeta defused, though Goku was able to destroy Omega Shenron later on with his Universal Spirit Bomb.

Gogeta is extremely powerful, since he is a fusion of the two most powerful Saiyans in existence. He has superhuman strength, speed, endurance, and durability and can manipulate energy in the form of blasts and flight.

Gogeta can use a variety of special techniques, such as the Big Bang Attack, a powerful energy sphere he fires from his outstretched palm, and the Super Kamehameha, a powerful energy wave attack, which are Vegeta and Goku's signature attacks respectively. Gogeta can combine these techniques into his Big Bang Kamehameha, which he performs by putting both his hands in front of him at a 90 degree angle with his palms out. He generates a bluish, white energy sphere in front of him and fires a huge, shockwave-like blast of energy from the sphere. Gogeta has a more powerful variation on this attack called the 100x Big Bang Kamehameha which made its first appearance in Budokai 3.

Another signature technique he uses is the Stardust Breaker (Soul Punisher), where Gogeta raises his hand above his head and forms a rainbow colored energy sphere. He then throws it into his opponent, disintegrating them, though the effect is somewhat delayed. Gogeta has also demonstrated the usage of Super Saiyan forms, like his fusees, namely the normal Super Saiyan and the Super Saiyan 4 form, depending on what form Vegeta and Goku are in when they fuse.

In Super Saiyan form, Gogeta demonstrated incredible power and as a Super Saiyan 4, he is even more so, to the point where he could toy with Omega Shenron, who couldn't be beaten by two Super Saiyan 4s.

In Broly, Gogeta in his base form was able to contend with Broly's Super Saiyan C-type form, until going Super Saiyan himself. Once Broly assumed his Legendary Super Saiyan form, Gogeta was forced to go Super Saiyan Blue to completely regain control of the fight.

Gogeta, as the fusion of Goku and Vegeta, was capable of transforming into a "Super Saiyan," a type of power up which saw its user's battle strength increase by approximately fifty times. While in the Super Saiyan state, Gogeta's hair turned golden and stood up and his irises took on a greenish-blue color.

Because Vegeta is able of using this form, Gogeta is naturally able to attaining it as well. It was displayed in Super Dragon Ball Heroes anime.

Like Goku, Gogeta can use the Kaioken as a power booster which can help him in times of need.

As a Saiyan, Gogeta has the ability to transform into a Great Ape when the moon is full, but he needs a tail.

As shown in Dragon Ball Heroes, Gogeta has the ability to transform into a Super Saiyan 2.

Gogeta as a Super Saiyan 3 can be considered the strongest being on Earth, rivalled only by Vegito.

Gogeta has the ability to tap into Super Saiyan God. Although it is never seen or mentioned, it is presumed to be very powerful.

Like his fusion components (Goku and Vegeta), Gogeta can access this state after the Super Saiyan God Form vanishes, this form can be used.

The last known transformation Gogeta used against the Shadow Dragon, Omega Shenron. Gogeta is really powerful in this form. 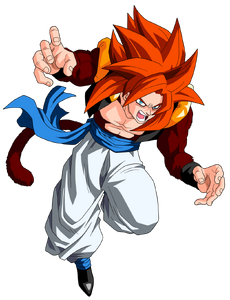 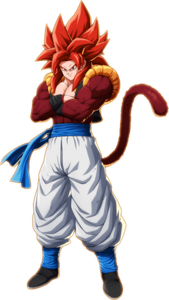