Captain of the Roger Pirates

Giving his position as Pirate King to a worthy successor (ongoing although his death).

Gol D. Roger also known as Gold Roger, is the posthumous overarching character of the One Piece franchise and the captain of the Roger Pirates. He was executed in his hometown Logue Town leaving the reason he is willing to be executed because of his illness (which cannot be cured). His bounty was 5,564,800,000 Berrie. According to Brannew His and his arch foe, Whitebeard's bounties were unsurpassed.

He was voiced by the late Chikao Ohtsuka in the first episode, then currenty by Masane Tsukayama and Takeshi Kusao as a child in the Japanese version of the anime. he was voiced by Brian Zimmerman in an alternate English dub by Odex, then by Frederick B. Owens in the 4kids dub, and Sean Hennigan as a adult and Marcus D. Stimac as a child in the Funimation dubbed in the English version of the anime.

Roger is hailed as having been one of, if not the strongest pirate of all time, considered nearly unstoppable in battle. As Pirate King, he retains the highest status among all the world's pirates even post-mortem. Elucidating this is the truly enormous bounty he had prior to his death, with 5,564,800,000 being the highest in pirating history.

Very few people are known to have ever matched Roger in battle: most prominently the legendary "Hero of the Marines" Monkey D. Garp, said to have cornered Roger multiple times before his surrender, as well as Roger's second foremost pirate rival Whitebeard, who held the power of the strongest Paramecia Devil Fruit and was called the "Strongest Man in the World", even before Roger's death.

Another person known to rival Roger was Rocks D. Xebec who was considered to be his first and most formidable rival, even more so than his former subordinate Whitebeard would come to be as it took the combined efforts of both Roger and Garp to finally defeat Rocks.

Other examples of Roger's strength include fighting on equal ground with Shiki, who commanded the largest pirate fleet of the time, and single-handedly defeating the armies of several countries. Oden even commented that Roger presented the aura of a wild beast.

Roger possessed immense physical strength, as shown when he easily overpowers Kozuki Oden. He could also clash evenly with Edward Newgate, matching him in strength.

Roger possessed immense endurance and vitality even when he was ravaged by an incurable disease. Aided by Crocus' medical skills, he managed to conquer the Grand Line. He was even able to fight for three days and three nights against Whitebeard until the fight resulted in a draw.

Roger was one of the very small number of people in the world who could use all three types of Haki.

Roger possessed immense mastery of Haoshoku Haki, which was seen when he clashed with fellow Haoshoku Haki user Edward Newgate. Their clash created a notable effect similar to lightning and released a large burst that traveled across the island that they were on and pushed back the Moby Dick alongside the nearby trees, clouds, and people. Most notably, Roger was one of the few people able to "infuse" his attacks with Haoshoku Haki to exponentially increase his attack power and make his Haoshoku Haki emit from a short distance from his saber, with his sword being shown emitting streams of lightning-like energy to signify this infusion

Roger possessed immense mastery over Busoshoku Haki. He could imbue his saber with the Haki, allowing it to evenly clash against the Haki infused Murakumogiri, one of the 12 Supreme Grade Meito. As a testament to his mastery, he overpowered Kozuki Oden, who was an exceptional master of Busoshoku Haki in his own right, with only a single brief attack. Furthermore, Roger with his Busoshoku Haki was able to battle against Whitebeard,

Roger possessed the ability to use Kenbunshoku Haki. as revealed in his vivre card.

Roger was born in Logue Town in East Blue. He met Rayleigh and traveled together as pirates.

40 years ago, Roger formed an alliance with Monkey D. Garp to fight and kill Roger's first rival and the most dangerous of all pirates, Rocks D. Xebec. Years after Xebec's death, Roger fought against Edward Newgate countless times and Garp many times. In the Gold Pirates Era, Roger stolen the blueprints of Road Poneglyph from Big Mom (which caused her enraged). Roger has suffered an illness (which cannot be cured) as he is dying. Roger surrendered to the Government to be executed in his hometown Logue Town. Before the time of his execution, Roger entrusted Garp to look after his son although Garp would decline.

Before the moments of his execution, Roger told in public to go search of his treasure, One Piece which caused many pirates to go in catastrophe although Roger was executed as he died smiling as the member of the D,'s family. 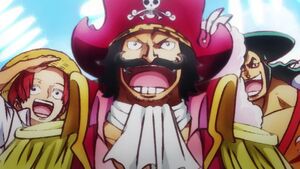 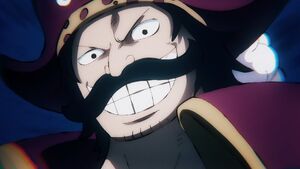