The Golden Queen is the redeemed leader of the Doom Raiders in Skylanders: Imaginators.

She is voiced by CCH Pounder.

During her rehabilitation, Master Eon gave the Golden Queen and the Doom Raiders a choice – either remain imprisoned or become Skylander Senseis, teaching a new generation of Imaginators their formidable battle skills as well as how to stay clear of a life of crime. They accepted the deal but first had to prove themselves by re-arranging all the books in the Academy's library, a task which took almost two years, and much to the Queen’s dismay, had nothing to do with gold. But this gave her an opportunity to rethink her insatiable desire for treasure and that maybe there is more to life than stealing. She now trains the Sorcerer Class and considers herself mostly reformed. 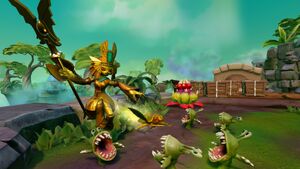