Complete his contract killings to success without getting himself killed.

Prevent others from discovering his past and kill them if necessary.
Ensure his clients fulfill the end of their bargains.

Has at least one child

Lethal
Mysterious
On & Off

Golgo 13, also know as Duke Togo, is the titular character of the manga series of the same name, created by Takao Saito. An assassin for hire, Golgo accepts jobs from various organizations & individuals. He is known for - among other things - his cold, calculating attitude, superb marksmanship skills & prowess with women. While there is no question that Golgo 13 is a cold-hearted killer, vast majority of people who die at the hands of Golgo are also very evil who at the very least partially deserve their demise. In the world of Golgo 13 no one is completely innocent.

Nothing is known about Golgo 13's history. Although various stories have provided details about his past, it always contradicts each other or cast doubt upon themselves. Many people have speculated that he might be Japanese or otherwise Asian, given his pseudonym "Duke Togo". And those who delve too close into his past end up dead at the hands of the said assassin, leaving his past unanswered. But one thing is certain with all these various stories revealed; when Golgo was young he suffered something so traumatic that it turned him into what he is today - a ruthless killer. In fact, some astute clients who requested Golgo's service asked him this: "Inside your eyes... They are full of sadness/wrath... What did you see?"

It is safe to say that as of right now, the only one who knows Golgo's past is Golgo himself.

Golgo 13 is cold & ruthless. Whenever he takes a job, he won't stop until it is complete. He is mostly quiet, talking only when he needs to. Despite his cold attitude, Golgo 13 has also admitted that he is cowardly as a rabbit, which is part of the reason that he manages to stay alive for so long. He also hates it when people walk up or stand behind him, and will instinctively punch anyone who does so.

Golgo 13 has a specific set of rules for carrying out contracts: He will only speak with a client once and refuses to enter into long-term contracts. Clients must be completely honest with him about their reasons for proposing the contract, and he will not tolerate betrayal or double-crossing (unless his clients are forced to betray Golgo by third parties; then Golgo would spare them with conditions on his own terms). He will not accept contracts where the reasons are unclear.

In addition, although Golgo would do his best to fulfill his contract, he is not responsible if the completion of his contract ends up producing different result than his client expected.

Golgo 13 is a top-notch sniper. For example, he was able to shoot Robert Horton at a distance of over 500 yards through a two-feet wide opening between two buildings with the sun shining in his face. He is very athletic and highly resistant to pain. He is also an excellent driver, as seen in Golgo 13: The Professional.

Golgo 13's weapon of choice is a customized M16 assault rifle. For backup, he carries a snub-nose revolver. He has various cars, most notably a Ford Laser in Golgo 13: The Professional.

Despite possessing various extraordinary skills and some physical attributes that are considered nothing less than superhuman, Golgo does in fact has a few weaknesses; in fact, his forte can sometimes become his liability. 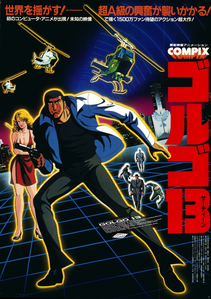 Golgo 13 as seen in the Japanese theatrical poster of The Professional, along with Cindy and the recurring cast. 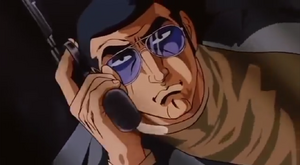 Golgo 13 as seen on The Professional. 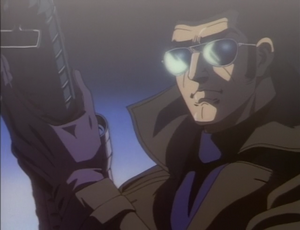 Golgo 13 as seen towards the end of Queen Bee. 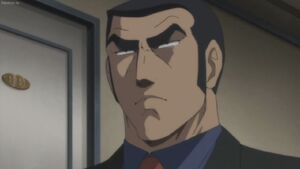 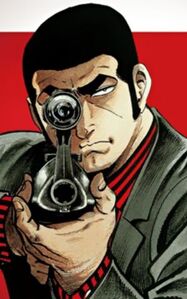 Add a photo to this gallery
Retrieved from "https://hero.fandom.com/wiki/Golgo_13?oldid=1912881"
Community content is available under CC-BY-SA unless otherwise noted.