Reclaim his home castle from Xanatos.

Protect his clan and city from evil.
Survive in new day and era.

Goliath is the main protagonist of Disney's Gargoyles.

He is voiced by Keith David who also voiced The Cat.

He is a large muscular gargoyle who has black hair, purple skin, huge wings and wears a brown loincloth.

Goliath hatched in 938 and was the head of his clan at Scottish Castle Wyvern in 994.

Like the rest of the clan he faced prejudice from the human residents of the castle; the Captain of the Guard regards Goliath as a mighty warrior, but Princess Katharine reminds him that the original Goliath was a "bully and a savage", even though the gargoyle was neither. Her father, Prince Malcolm had named him years before. In this time, he had mated with a female gargoyle that he called his "angel of the night" (later to be named Demona) during the Viking attack he was led away from the castle with his mentor (later called Hudson) on bad information that was part of a greater plot conceived by Demona and the Captain of the guard to evict the humans and leave the castle to him and the Gargoyles. When he returned, he believed that his love had been killed with the rest of his clan, and desired vengeance.

Goliath led the five surviving clan members in a raid on the Vikings, and personally chased the Viking leader Hakon when he fled with Princess Katharine as hostage. He rescued Katharine, but Hakon himself was tackled by the Captain and they fell to their deaths (though they were later encountered as ghosts) things were only compounded when he returned to the main group of Wyvern's refugees to discover that the five remaining members of his clan had already been turned to stone by a grief stricken Magus, who believed that Princess Katharine had been killed and that it was their fault.

Upon realizing his mistake, he followed through with Goliath's request that he join them in stone sleep, and, along with Princess Katherine, vowed to protect the rookery eggs. The Magus could not reverse the spell himself, and it would only break if "the castle (rose) above the clouds".

In 1994, the billionaire David Xanatos purchased the ruins of Castle Wyvern, moved the structure to Manhattan, and had it rebuilt on the roof of his skyscraper. With the castle now "above the clouds," the spell broke and the surviving gargoyles were reawakened. Initially distrustful of Xanatos's intentions, after an attack on the castle by enemies of Xanatos, Goliath agreed to work for him for a time. It was through the intervention of an NYPD detective, Elisa Maza, that he came to see Xanatos as a ruthless schemer who had manipulated him, and finally agreed to lead the clan away from their ancestral home. He also encountered his former love, his "angel of the night".

Now called Demona, she had also survived through to modern times, and had been partially responsible for the Viking attack that had wiped out the clan. She was cruel and twisted, and spiteful of humans, but Goliath nevertheless held out hope for a long while that she could be redeemed. Eventually, he came to realize that this could not happen and turned his affections toward Elisa, though for longer still neither of them would acknowledge the fact. Partway through the second season, Goliath discovered that the rookery eggs from Castle Wyvern had been moved to the mythical island of Avalon, and were cared for by Princess Katherine and the Magus who had vowed to protect the eggs as atonement for freezing the clan in stone.

On Avalon they formed a new clan, and among them was his own daughter, Angela He was reluctant to accept parenting responsibilities, partly because of the Gargoyle tradition that the entire clan acts as a parent rather than one particular Gargoyle acting as a parent to his/her biological offspring and partly because he knew that Angela's mother was Demona, but was eventually convinced to treat her as a daughter. She became a part of the Manhattan Clan when they finally returned from Avalon. He also has an evil clone, Thailog, whom he has grudgingly accepted as a "son" (since Thailog was created from Goliath's DNA). 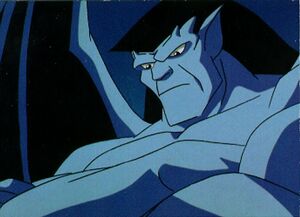 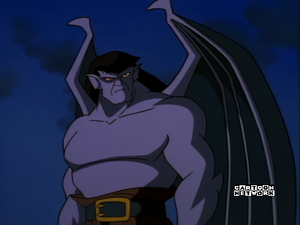 Retrieved from "https://hero.fandom.com/wiki/Goliath?oldid=2137743"
Community content is available under CC-BY-SA unless otherwise noted.