The two formed a great friendship, and Liu Bei even moved into the cottage of Gongsun Zan. Their friendship will continue to enter their adult life. During his tenure as governor of Peiping, Gongsun Zan used his influence to make Liu Bei a plain county magistrate.

Gongsun Zan has one of the largest military units in China, and he often fights against the Qiang people on the northern border. Qiang people gave him a nickname general called White Horses, because he always ensured that the van had only white horses because they were considered sacred by Qiang people. This strategy led to an easy victory for tribal members as they would run out of sacred animals.

After Dong Zhuo's tyrannical rule ended, Gongsun Zan fought with Yuan Shao in an attempt to seize control of northern China until the former perished. The army describing him is a group of cavalry who are known for their flocks of white horses. Several sources said that these horses were originally used by Gongsun Zan as a strategy against Qiang and Xiongnu tribes because they had a sacred belief in these creatures. Although they have the same surname, they have nothing to do with Gongsun Yuan. 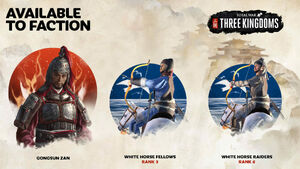 Retrieved from "https://hero.fandom.com/wiki/Gongsun_Zan%27s_Army?oldid=1856928"
Community content is available under CC-BY-SA unless otherwise noted.