Spending time with and studying insects


To escape from Killing School Semester by himself through mercy killing the rest of the cast (failed due to memory loss).

Gonta Gokuhara is a character featured in Danganronpa V3: Killing Harmony and a participant of the Killing School Semester.

As a child, he became lost in the woods, where he was raised by a pack of wolves. There, he learned how to communicate with animals and bugs, which later earned him the title of the Ultimate Entomologist (Super High School Level Entomologist).

Gonta was born into a very rich and refined family. Ever since he was a child, he used to play more with insects than people because the other children were too intimidated by his appearance.

As a child around preschool age, Gonta got lost in the woods while searching for insects. Gonta survived thanks to being raised by a family of Reptites, a race of dinosaur people who evolved from surviving dinosaurs and lived hiding after losing a battle for dominant species against humans long ago. They lived alone deep in the forest, and Gonta learned to speak with animals and insects. Sometimes Gonta would find and be challenged by legendary fighters, learning a bit about their civilizations too. His adoptive family warned Gonta not to tell about their existence to humanity, so Gonta promised he wouldn't and began lying about being raised by a ”family of kind wolves”.

After ten years, he was finally returned safely to his original family and he earned his Ultimate. Thanks to the knowledge he obtained from his mountain family, he identified and cataloged insect species not yet known by humanity, strongly advancing his field of study. He had also developed cultivation methods, and once discovered a parasitic worm that was causing disease, and was praised as a hero after saving many lives. However, his family strictly reprimanded him for becoming wild and not elegant enough to uphold the family's name, blaming Gonta's mountain family. Gonta then decided he must prove himself by becoming a true gentleman in order to make his human family acknowledge his mountain family.

It is unclear how much, if any, of Gonta's past before participating in the 53rd Killing Game was real, and which fabricated by Team Danganronpa.

In Chapter 4, Kokichi Oma convinces him to kill Miu Iruma in the Killing Game Simulator as a counter-plan to avoid being murdered by her, and Gonta is found guilty and executed at the end of the Class Trial.

Gonta was a very tall and muscular teenager boy with tanned skin. He had a noticeably angular face and very long, messy brown hair, with noticeable prominent curls at the top of his head that resemble ahoges. He has red eyes and wears round glasses.

Gonta wears a brown school blazer and matching brown pants, a dark, lime-green tie, and is barefoot. He carries a bug box strapped over his shoulder and resting at his hip, the strap is a light green, nearly matching his ties color. He has a silver button on the lapel of his blazer, showing the insignia of his previous high school, and gold cufflinks.

As his appearance suggests, Gonta has incredible, superhuman strength, but he is gentle and kind, and says he would never hurt even a bug. His stoic face is especially fierce, brows knitted and frown apparent, supposedly due to his upbringing in the wild.

In the prologue, he wears the uniform of his original high school, which is dark blue. He also wears brown loafers and light brown soles, which is something he normally doesn't like to do. He awkwardly fitted his well-trained body into the uniform, but his intimidating stature overwhelms anyone who meets him. His gakuran's color is uncommon persimmon indigo (dark slate blue), which makes him look noble.

Gonta liked animals very much, especially insects, and he can even speak with them. He was a kind-hearted, gentle and polite boy. He was very pure and naive, as he easily believes strangers and can get easily discouraged by other people's comments. When he is accused of being the culprit, he answers with complete honesty even if it makes him look much more suspicious. He also does not seem to understand sexual matters very well, as after seeing half-naked Miu he states he got a "weird feeling", and he assumes being "horny" means something like having horns on your head. Even his uncharacteristic "keep you up all night" line during the Love Suite scene appears to be a case of misinformation. He himself acknowledges and often points out that he is dumb, which is one of the reasons why he listens to other people so much. Naturally, he strongly dislikes killing and cruelty, which can rather easily make him cry. However, despite his gentle nature, he can turn very angry if he sees or hears someone hating on insects, and he believes bug lovers can't be bad. Due to his strong love for bugs, he is often seen searching and yelling for them to come out, claiming that he wants to talk with them.

In order to repay his woodland family, he aims to become a true gentleman. Gonta wants to be useful to others, but he prefers not to do physical fighting and violence. He also gets very ashamed of himself if he does something a gentleman wouldn't do, like telling lies, losing his temper, making rude assumptions, seeing someone naked or half-naked, or accidentally touching someone inappropriately. It's noted that he isn't very gentlemanly yet, as he's a bit clumsy and sometimes gets controlled by sudden and strong emotions (which is implied to be a result of being raised in the wild), but he tries very hard. He occasionally gets very scary with intense expressions, especially when talking about bugs or if he is otherwise upset or frustrated, making other people afraid. He sometimes does not seem to notice that he is unintentionally scaring others, while during some other moments he can be very perceptive of others' feelings. He sometimes fears he might never become a gentleman and he can be very hard on himself. He doesn't seem to acknowledge many of his past or current accomplishments, thinking they're just some things all gentlemen would have done. 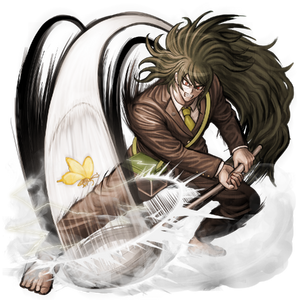 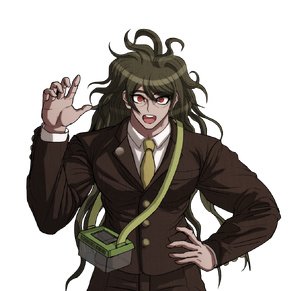 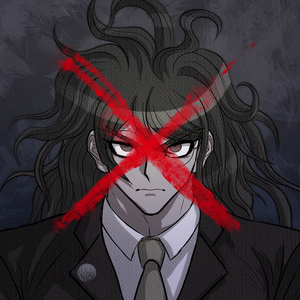