Her parents allowed her to name herself when she was a baby, resulting in the full name "Goo Goo Ga Ga". Goo enjoys playing games such as Checkers and Truth or Dare, but she does not know how to play, and Mac is the only one who notices.

In her first appearance, she constantly created friends because she had no real friends because of her odd behavior. She finally stopped making new friends after Mac told her to get to know the ones she had made already. However, she has still created a few by mistake or to help on rare occasions.

She is also shown to be friends with Cheese, as both of them get along because of their odd doings. She looks a little older than Mac, though it's never been stated how old she is. 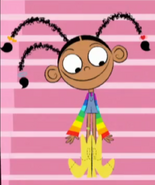 Retrieved from "https://hero.fandom.com/wiki/Goo_(Foster%27s_Home_for_Imaginary_Friends)?oldid=2214316"
Community content is available under CC-BY-SA unless otherwise noted.