Hanging out with Kirby.

Team up with Kirby to defeat Dark Matter and the Jambastion Cult (succeeded).

Sidekick
Gooey is a character form the Kirby franchise. He is a friendly blob of Dark Matter that is best friends with Kirby.

Gooey has a sister named Blob.

Gooey is absent minded and an "oddball". Despite his quirks, he is very friendly and kind.

Gooey can gain the exact same abilities like Kirby from his enemies, except instead of inhaling them, he uses his long tongue instead.  However, when  battling 0, instead of getting Starship like Kirby, Gooey can instead turn himself into a form that resembles Dark Matter. While he can eat underwater, he cannot eat two enemies at once.

Gooey first appears after defeating certain mid-bosses in bags. However, he only appears when an animal friend that was originally in the bag is already paired with Kirby. He can replenish health

Gooey is a fully playable chracter here acting as the second player that can be controlled by the CPU or second player. Gooey accompanies Kirby in his fight against Dark Matter.

Gooey appears as a playable character in Kirby Fighters 2, being unlocked at Fighters Rank 3. He retains his moveset from Kirby Star Allies.

Gooey appears as an collectible trophy.

Gooey appears as a advanced primary neutral spirit. His spirit battle is a timed battle on the Dream Land stage against dark blue Kirby who favors neutral specials. 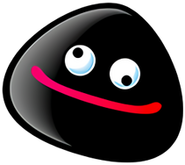 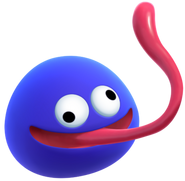