Playing tricks
Being polite to each other

They are small and brown with tan bellies and buck teeth. They both have British accents. Their names are puns on the surname "Macintosh." They are characterized by an abnormally high level of politeness.

The Goofy Gophers were created by Bob Clampett, but Eddie Selzer fired him for unknown reasons. Arthur Davis finished "The Goofy Gophers" planned by Clampett. (Norm McCabe had used a pair of gophers in his 1942 short "Gopher Goofy", but they bear little resemblance to Arthur Davis' characters).

The cartoon features the gophers' repeated incursions into a vegetable garden guarded by a dog whom they relentlessly, though politely, torment. Mel Blanc plays Mac and Stan Freberg Tosh. Both speak with high-pitched English accents like those used in upper-class stereotypes around at the time.

Mac and Tosh's dialogue is peppered with such over politenesses as "Indubitably!", "You first, my dear," and "But, no, no, no. It must be you who goes first!" Clampett later stated that the gophers' effeminate mannerisms were derived from character actors Franklin Pangborn and Edward Everett Horton.

Mac and Tosh are extremely affable and good gophers. In fact, they tend to lend a helping hand whenever it is possible. This traits extends further in The Looney Tunes Show, as they take their politeness in a whole new level. Mac and Tosh are willing to help other characters (such as Daffy Duck and Bugs Bunny) and donate money to charity. 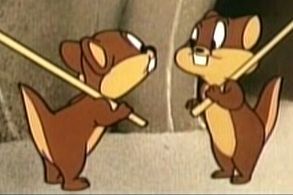