Supporting doppelgänger
Gooigi is a green doppelgänger of Luigi made from supernatural goo who assists Luigi in the Luigi's Mansion video game series.

Around the events of Luigi's Mansion: Dark Moon, Professor E. Gadd began experimenting with a paranormal energy that had taken the form of a gooey substance. At first, the substance made no reactions to E. Gadd's experimentation, until the professor was scared by a ghost and accidentally spilled a cup of green coffee he was holding onto it, causing the substance to suddenly come to life. E. Gadd tested the entity further and discovered it was weakened by fire and water, but could instantly regenerate from any mortal injuries.

E. Gadd saw potential in utilising its abilities in ghost hunting and decided to teach the living goo how to hunt and capture ghosts by have it watch recordings of Luigi doing just that. Eventually, the goo began to imitate Luigi by taking his form and even produced its own Poltergust from its body. E. Gadd dubbed his creation Gooigi and had it practice vacuuming ghosts until he believed it was ready for field testing. The professor modified one of his Pixilator devices to send Gooigi back in time and assist Luigi during the events of the first Luigi's Mansion game.

Gooigi serves as a second player for the games multiplayer mode. He first appears inside E. Gadd's Lab, emerging from a nearby monitor while future E. Gadd explains to Luigi and his past self his reasons for sending him there. He has half the health of Luigi, cannot open doors and vulnerable to fire. However if he loses all is health, Gooigi can regenerate himself after a few seconds.

Gooigi reappears after Luigi retrieves E. Gadd's suitcase on the fifth floor of the Last Resort hotel. He is stored inside Luigi's Poltergust G-00 and can be summoned anytime to assist him by entering barred off areas and lifting objects Luigi cannot lift alone. He can also help Luigi by reacting whenever Boos are hidden nearby. Gooigi only has 25 health and can be dissolved by fire and water. But he can regenerate himself after a few seconds if he is defeated. 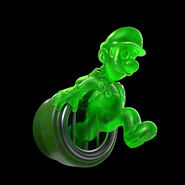 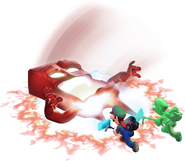 Retrieved from "https://hero.fandom.com/wiki/Gooigi?oldid=1707039"
Community content is available under CC-BY-SA unless otherwise noted.