Hard-working Gopher
Gopher (Full Name: Samuel J. Gopher) is a fictional gray anthropomorphic bucktoothed gopher with a habit of whistling out his sibilant consonants and a minor character in the Winnie the Pooh saga. He is based on the beaver in Lady and the Tramp. He often accidentally falls into one of the many holes he makes in the forest ground by forgetting to watch where he is going.

Gopher first appears as the tritagonist in Winnie the Pooh and the Honey Tree and regularly breaks the fourth wall by pointing out that he is "not in the book", though this could simply mean that he is 'not in the Phone Book', and the purpose of his statement being to get better business. Originally, he was intended to replace Piglet, but he later became his own character. He also appears as a minor character in Winnie the Pooh and the Blustery Day, warning Pooh about the "Windsday".

Gopher is a major character in The New Adventures of Winnie the Pooh. The series depicts him as a hard worker who takes pride in building tunnels and doing other work, and enjoys blowing things up with dynamite. Gopher and Rabbit often disagree with and complain at each other. In the episode "Lights Out", he is afraid of the dark (mostly instigated by Tigger's claims of dangerous creatures down there). His grandfather also appears. Gopher's most recent appearances were in A Winnie the Pooh Thanksgiving, Winnie the Pooh: A Valentine for You and Boo to You Too! Winnie the Pooh. The latter was included as part of Pooh's Heffalump Halloween Movie. Gopher was notably absent from the 2011 film. After nearly 13 years in obscurity, he returned in Kingdom Hearts III.

Gopher has been voiced by the late Howard Morris (1966–77) and most recently by Michael Gough (1988–present), who also voiced The Scarecrow in Tom and Jerry and The Wizard of Oz and its sequel Tom and Jerry: Back to Oz. 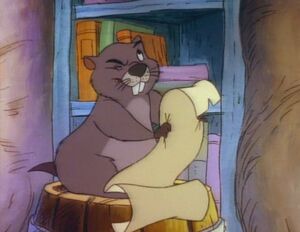 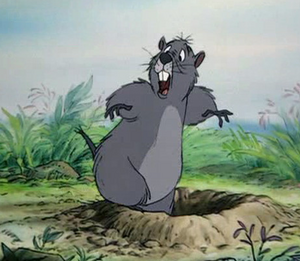