Gord is a supporting character in Disney's 2018 animated feature film, Ralph Breaks the Internet. He is Spamley's right-hand man and sidekick.

Gord is first seen in J.P. Spamley he just took Ralph and Vanellope into, he appears in a way that scares the two of them.

It is then seen that Gord can stretch his arms.

Spamley and Gord give the boys a card where they can make $ 1,000,000 by taking Shank's car in the video game called "Slaughter Race."

Gord is later seen with Ralph and Spamley on the infamous part of the internet where they visit his cousin Double Dan, who is a virus creator.

Ralph, wanting to sabotage Slaughter Race in order not to lose Vanellope, catches a virus called Arthur, Double Dan, however, warns the three that if they lose Arthur there will be serious consequences.

This comes after Arthur destroys Slaughter Race and now infects the whole internet, Ralph manages to save the internet and stop Arthur but falls from a tower.

Spamley and Gord rush in with their car to help him but the attempt fails. However, Ralph is saved by the Disney Princesses and then everything returns to normal.

Gord is short in stature, with pink skin, large eyes with black pupils, a small nose, long arms, and short legs. He wears a brown turtleneck sweater which covers half his face. Gord's arms (which are usually tucked close to his diminutive body) are extendable. Spamley uses Gord's elasticity to shove advertisements in front of net users. 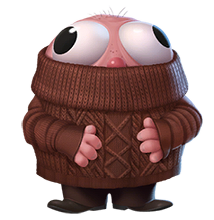