Mr. Freeman
One Free-Man
Anticitizen One

Defeat Wallace Breen. (both succeeded)
Defeat the Combine and free humanity.
Save Alyx Vance from the G-Man and defeat him (both ongoing)

Gordon Freeman is the main protagonist of the Half-Life series, an FPS thriller franchise created by Valve in 1998. He is depicted as a bespectacled Caucasian man from Seattle, with brown hair and a signature goatee, who graduated from MIT with a PhD in Theoretical Physics. He was an employee at the Black Mesa Research Facility.

At only the age of 27, Gordon Freeman graduates from the Massachusetts Institute of Technology with a Ph.D. degree in Theoretical Physics. He is then employed at the Black Mesa Research Facility in New Mexico, where he works as a research associate in the Anamolous Materials laboratories in the year 200x. Gordon works as an assistant to Dr. Isaac Kleiner, working in the anti-mass spectrometer in order to discover the identity of unknown materials and their attributes. One day while running late for work, Gordon quickly fits into his HEV suit and heads off to the test chamber to test another of the facilities samples, one Kleiner states to be "the purest sample they've seen yet." Still unknown of the samples properties, or it's origin, they are forced to power the spectrometer at a staggering 105%, a number many of the scientists don't feel safe about.

Gordon enters the chamber and receives the specimen and delivers it via cart into the spectrometers beam. Gordon is then told to press a button and push the cart, after which the crystal reacts negatively with the spectromer, causing a Resonance Cascade, thereby opening a rift between Earth and the crystals home world dimension Xen, releasing hostile aliens throughout the facility, and the rest of the world. The spectrometers explosion kills many of the scientists, far outside of the actual test chamber, however Gordons suit manages to protect him from the blast, leaving him to travel through the wrecked facility, in search of whatever survival he can.

With his suit saving his life Gordon travels through the wrecked facility, stumbling across piles of rubble and dead bodies, with dozens of aliens teleporting in by the second. Gordon reaches another colleague, Dr. Eli Vance who alerts Gordon that all communication to the surface is lost and tasks Gordon to go to the surface and get help, knowing his suit will protect him. Gordon agrees to the task and makes his way through the facility with the help of other scientists and whatever weapons he can find to combat the oncoming Xen invaders.

When Gordon finally reaches access to the surface he hears hope of the military coming to their aid, however his hope is short lived as the military's idea of help is covering up the entire catastrophe by killing the aliens as well as witnesses to the event, including the scientists and Gordon, the latter of whom they believe sabotaged the spectrometer and caused the cascade purposely.

Gordon must then fight through them as well, traveling through several sectors of the facility, finally launching a satellite deliver rocket that would close the rift successfully. Gordon manages to launch the rocket flawless but it doesn't close the rift, having learned about the Lambda complex on the far side of the base who's scientists are alleged to know how to stop the cascade, Gordon makes his way there, facing more hoards of stronger aliens and military personnel, ultimately ending in the militarizes retreat from the facility. Gordon reaches the facility, where he is informed that the rocket managed to close the rift on their side, but it's still being held open on the other side by a powerful being, the Nihilanth. Gordon must travel over to the alien world and kill it. Gordon travels to Xen where he confronts the Nihilanth and kills him, ultimately closing the rift.

After defeating the Nihilanth Gordon meets an enigmatic humanoid entity known only as the "G-Man", who has been watching Gordon's progress all along. The G-Man praises Gordon and is impressed with his capability to adapt, survive, and fight, so much so that the G-Man's "employers" are willing to hire Gordon. If Gordon refuses, he is teleported to an area full of alien soldiers to be killed immediately. If Gordon accepts, the G-Man congratulates him and places him into stasis to await his next task.

Gordon is awakened from his stasis by G-Man over 20 year into the future. There, Gordon learns that the death of the Nihilanth caused numerous portals to strike across Earth in the form of a storm, allowing numerous Xen creatures to flood the planet. This event attracted the attention of the Combine, a multidimensional empire that proceeded to conquer Earth in only seven hours. Overpowering the Earth's military and enslaving the human race.

The only human with any freedom at all is Wallace Breen, the former Administrator of Black Mesa. Breen represents the Combine on Earth, acting as a sort of tyrant, though under the Combine's supervision. The Combine also demonstrate the reasoning for their name, as they begin to capture humans and combine their DNA with the Combine's DNA, in addition to brainwashing them and converting them into soldiers who are clad in combat vests, military-esque fatigue, and advanced styled gas masks. The Combine have also done this with numerous other races, shown through the vehicles seen throughout the game, including gunships, drop ships, and striders.

Gordon learns of the Combine's rule and joins the Resistance, an organization of humans whose goal is to overthrow the Combine and retain their freedom. The Rebels look up to Gordon due to him surviving and stopping the Black Mesa Incident, and make him their leader. Gordon's prime sidekicks are Alyx Vance, a girl whose father, Eli, is also a Resistance member and former Black Mesa employee, and Dog, a large, silent but confident robot built by Eli himself. Two of Gordon's friends from Black Mesa, Barney Calhouln and Issac Kleiner, are also members. Through numerous events, Gordon manages to destroy the one same-universe teleported the Combine have, and seemingly kills Dr. Breen, the events of which cause an eruption in the Citadel (Breen's private quarters built by the Combine).

The explosion buries Gordon under a pile of rubble, but he is dug up and saved by Dog, who helps him and Alyx reach the still-standing-but-ready-to-explode Citadel, where they must find a secret code that the Combine intend to use to open a portal to their world. They find asid code, as well as the results of their previous actions, which have led to the zombification of multiple Combine squads. They manage to escape outside of town as the Citadel finally explodes.

They make their way to the rebel base to use the code to program Kleiner's rocket to destroy the Combine portal which is now active. Along the way, they encounter the smaller counterpart to the Strider, the Hunter, multiple squads and traps, and come face to face the Advisors, the devolved leaders of the Combine Empire. At the base, they learn of a mysterious vessel know pn as the Borealis, which Eli insists in finding, located in Antarctica. The group destroys the portal and heads for Antarctica, but not before two Advisors arrive and kill Eli, before Dog drives them off. The scene ends with Alyx weeping over her father's corpse.

Gordon is shown to Alyx by the G-Man at the end of Half-Life: Alyx. The G-Man had grown displeased with the lack of progress Gordon had apparently made as well as his refusal to obey orders, and Alyx would be a suitable replacement for him. His HEV Suit has been damaged from the Advisors' attack.

In the post-credits scene, after Eli's resurrection, the player briefly controls Gordon as Eli swears revenge on the G-Man for taking his daughter away from him. Dog then shows up carrying Gordon's signature crowbar. Eli takes the crowbar from Dog and hands it to Gordon, saying, "C'mon, Gordon. We've got work to do."

Gordon Freeman is an American MIT graduate, with a PhD in theoretical physics who is constantly tasked with defending the human race from interdimensional evil. Gordon is seen wearing glasses, a Hazardous Environment protection suit, which helps protect against, bullets, explosives, and radio-activity, and his signature red and white crowbar. Gordon is a silent protagonist throughout the entire series, his only vocal piece being his suits AI warnings, that alert the player of ammo, health, and hazards. Gordon's suit gives him almost super human attributes, often making him the last hope for humanity in time of crisis. 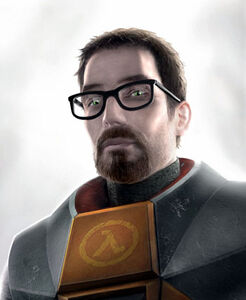 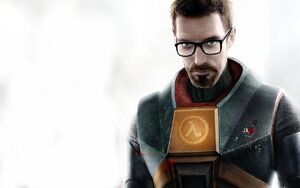 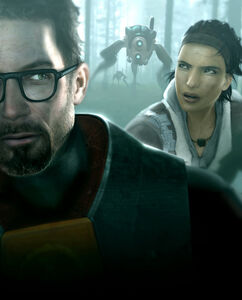 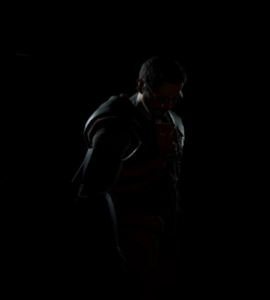 Gordon Freeman in Half Life: Alyx
Add a photo to this gallery

Retrieved from "https://hero.fandom.com/wiki/Gordon_Freeman?oldid=2304652"
Community content is available under CC-BY-SA unless otherwise noted.