The Gorgonites are the enemies of The Commando Elite. Built from the same military company (Global Tech. Industries) and also hard-wired with the same micro-processing chip X-1000 were created to be the enemy of the commandos. Unfortunately, The Gorgonites were programmed to hide and lose to the commandos. Whenever a gorgonite notices a commando, it’s main objective is to hide and try not to get disassembled. The gorgonites are nothing like the commandos. They are peaceful, kindhearted creatures. The only thing that the gorgonites were really programmed to do was to find their homeworld: Gorgon. The irony is the Global Tech tried to make the Gorgonites look like the villains, but they're not. During the film, the Gorgonites were able to overcome their programming and they fought back against the commandos. Their combat skills maybe more superior than the Commando Elite. They are more formidable opponents in combat. They were able to win the war against the Commando Elite. Their leader is Archer and they are protected by Alan. They survived the EMP blast by hiding underneath a satelite dish after all of the commandos including Major Chip Hazard were destroyed by the EMP blast. By the end of the film, the Gorgonities wave goodbye to Alan in a large toy boat as they began to find their home, Gorgon. 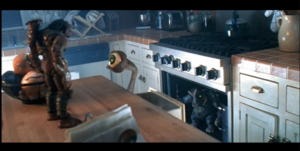 The Gorgonites' choice is to help Alan, his family and Christy Fimple's family defeat the Commando Elite.