The Goseigers are the titular heroes who use their Tensou Techniques to protect mankind. They are the main protagonists of Tensou Sentai Goseiger.

The Goseigers were Gosei Angels-in-training from Gosei World, each a pair from one of the three divisions to refine their elemental powers on Earth: Alata and Eri of the Skick Tribe, the siblings Moune and Agri of the Landick Tribe, and Hyde and Magis were of the Seaick Tribe. The six angels would practice on Earth in pairs, having little connection with the other tribe members. During a routine training mission on Earth, Dereputa of the Meteor of the Universal Annihilation Army Warstar devastated the Heaven Tower in order to prevent any interference from Gosei World. Without the Heaven Tower, the Goseigers would not be able to connect with Gosei World, or teleport back there, leaving them stranded on Earth. Around this time, Magis was killed when he fought against Warstar's Kurasuniigo of 5000 °C.

The five reamining Gosei Angles unwillingly cooperated and for the next ten days they ward off Demon Bug Soldiers Bibis that attacked the city. The leader of the Warstar, Mons Drake saw it as an opportunity to start working in annihilation, sending Mizogu and then Zaruwaku to deal with the Goseigers. Though there was one chance to create a portal to Gosei World with a momentary and rare solar flare, the Goseigers concluded to stay on Earth to battle the growing Warstar threat. This results in them gaining the power to transform their Headders into Gosei Machines.

A later encounter was when the Goseigers sensed an evil presence that both the Shinkengers and Go-Ongers were fighting. When a contingent consisted of Akumaro Sujigarano, Dayu Usukawa, and Juzo Fuwa entered the battle, the remaining Goseigers decided to come together and stop them. The rest of the conflict was left to the other Rangers.

When the Gedoushu resurfaced, Alata encountered Takeru Shiba of the Shinkengers as they strike an instant companionship. However, recruited by Ryunosuke Ikenami and Chiaki Tani, the two teams confront the mastermind behind the conflict: A new form of Bredrun called Buredoran of Chimatsuri. Buredoran captures Shinken Red with the male Shinkengers refusing to work with the Gosei Angels as they turn to Mako Shiraishi and Kotoha Hanaori before they are confronted by the Buredoran's brain washed Takeru. Alata shocks Takeru's vassels by intentionally throwing herself into Gedou Shinken Red's attack for them before they are spirited away by Gosei Knight and Genta Umemori. In doing so, they realize the combined might of Mojikara and Tensou Techniques.

The Shinkengers (impressed with Alata's resolve) train with the Goseigers in their respective elements to regenerate the power surge Genta and Gosei Knight were made from. Kaoru Shiba then begs Alata to add the power of flame to his Tensou Technique. He trains with her privately and absorbs the Shiba Fire into the "Kaen Tornado" Card that he uses to bring back Takeru. The combined might of the Goseigers and Shinkenger overwhelm Buredoran's forces, especially when the Goseigers grant all the Shinkengers with the power to use the Inromaru, all in Super Mode, all sides unaware of Shitari of the Bones's attempt to take out sides taken out by the time traveling Gokaigers. With his plan to transfer the Sanzu River into Gosei World ending up in failure, Bredrun battles the Super Sentai teams' mecha before his defeat in the hands of Ground Hyper Gosei Great.

Years later, the Space Empire Zangyack invaded Earth. This threat was so powerful that all of the first 34 Super Sentai, including the Goseigers, who'd been promoted to angels in Gosei World, were needed to oppose them. The Goseigers were the last team to be enlisted by Akarenger and Big One The 34 Sentai put up a valiant battle against the ground forces, but when the Zangyack fleet itself attacked them, Akarenger ordered everyone to combine their powers and save the Earth. This destroyed the Zangyack fleet and resulted in the loss of their powers, which resurfaced as Ranger Keys, that were spreading throughout the universe.

Gosei Knight
Groundion Headder
Add a photo to this gallery 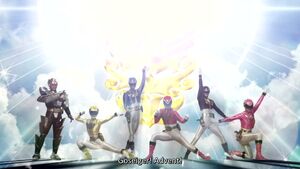 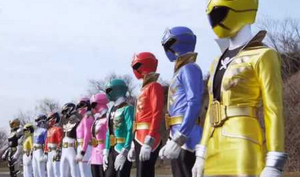 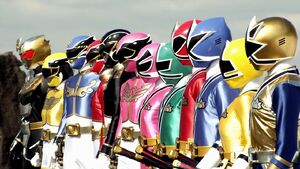 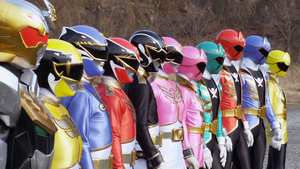 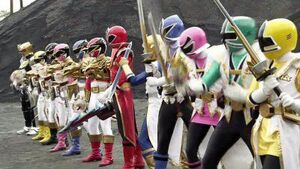 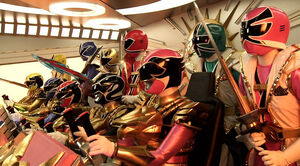 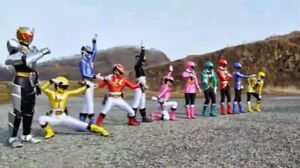 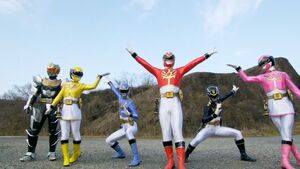 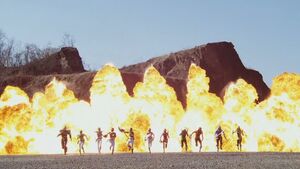 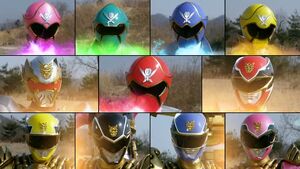 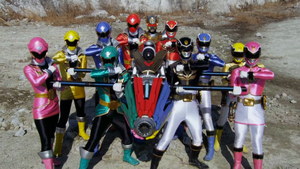 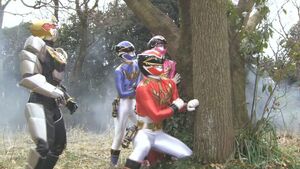 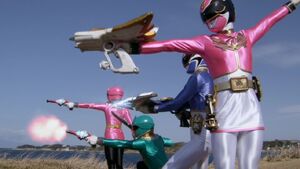 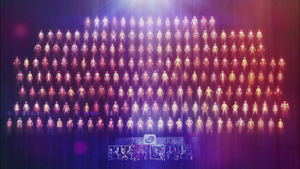 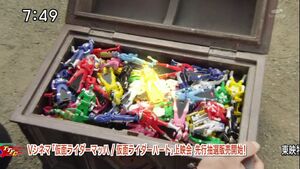 The Gokaigers made use of the Ranger Keys in their fight with the Zyuohgers and Bangray.
Add a photo to this gallery

Retrieved from "https://hero.fandom.com/wiki/Goseigers?oldid=1855239"
Community content is available under CC-BY-SA unless otherwise noted.