Start a Wiki
Gotai is a character in Tribes of the East. He's one of protagonist in this game.

Gotai is Quroq's adoptive son. When Quroq was killed by Alaric, Gotai swore to find him and kill him. With Kujin's advice, he went into a contest and won, becoming the orcs' leader. He crossed the cities of Griffin Empire and destroy them for the time of slavery. This attracted Alaric, who went to hunt him. Eventually, Gotai came to the Silver Cities and visited Kunyak's grave at Shahibdiya and faced Alaric. Khengi told Alaric a honorable death, but Alaric mistook Khengi for a demon and killed him. Gotai was furious and killed him, ending his revenge.

Eventually, he and Kujin spoke with Zehir. He gave them Kunyak's staff and with Zehir's stories about battling with Kha-Beleth, they joined the fighting at Talonguard. With their forces and others, Biara was killed. Gotai and Kujin came back to the orcs, where Gotai continued to rule as the Khan. 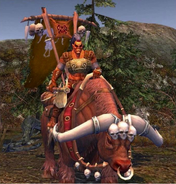 Gotai killing Alaric
Add a photo to this gallery
Retrieved from "https://hero.fandom.com/wiki/Gotai?oldid=1623523"
Community content is available under CC-BY-SA unless otherwise noted.