Gotenks is the fusion combination of Goten and Trunks. The two learned fusion in the attempt to defeat Majin Buu. But when Gotenks finally came alive after several failed attempts, he was much more cocky and arrogant than planned, and fought Buu before he was ready. So the two boys went in the Hyperbolic Time Chamber to train, and fought Buu again there. But to be more dramatic Gotenks pretented to be weak, before transforming, which made Piccolo paranoid and he blew the door. Buu escaped by creating a tear in the universe. So Gotenks transformed into a Super Saiyan 3, and then created his own way out. After that he fought Buu, but eventually lost due to the time limit with the fusion. He came back once Gohan had saved the day, but only to be absorbed by Buu, and never seen in the show again aside from one other time. Gotenks has also showed in many video games, and numerous movies. 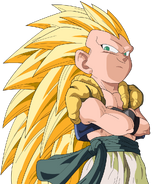 SSJ3 Gotenks
Add a photo to this gallery

Retrieved from "https://hero.fandom.com/wiki/Gotenks?oldid=1710454"
Community content is available under CC-BY-SA unless otherwise noted.