Mentor of Ryu and Ken

Train warriors to be stronger.

Gouken is a character and a hero in the Street Fighter series. He is Ryu's adoptive father, Ryu and Ken's martial arts master, and Dan's former master as well as Akuma's older brother. Gouken's first actual appearance as a playable character was in Street Fighter IV as a boss character. He is an unlockable character in the home console version of the game.

Gouken is the master of Ryu and Ken and Akuma's older brother; he trained with Akuma under Goutetsu until Akuma killed their master in a Duel to the Death. Gouken refined the special techniques from the assassination art taught to him by Master Goutetsu into a non-lethal martial art, then passed on his knowledge to Ryu and Ken. He was believed to be dead, but he managed to survive his battle with Akuma by using the Power of Nothingness — which empties the mind and soul of all thought and sin — to render the Shun Goku Satsu useless. As a side effect, however, he was rendered unconscious for several years. Gouken now hopes to reunite with his pupils and test their strength.

He makes an appearance in Street Fighter V as an NPC during the game's tutorial mode, which involves Ryu having a flashback to the Alpha era, back when Gouken was training him.

Gouken is most often depicted as an elderly yet very well-built man with a white beard and prayer beads around his neck. In his most recent Street Fighter IV appearance, Gouken wears a single sleeved, gray-colored karate gi and sports a long, white braid of hair adorned with a single prayer bead.

Gouken's personality is naturally that of the archetypical "master elder", which is common within media related to martial arts; the "elder" personality type is evident in the same type of media (as well as Western media characters such as Obi-Wan Kenobi); despite this, he does have many aspects that do have him stand out as a character.

As stern and serious as he can be, Gouken is nonetheless enthusiastic in the nature of competition, being a spirited and modest good sport at heart. His approach is silent and calm, evocative of "zen" principles, and he often shares insightful (if not also blunt and critical) advice and wisdoms to that effect. For example, he tells Dan that anger will not help him (fearing it would lead him to a dark place), and he informs Dee Jay that if he is silent, he would be surprised at what he learns. Gouken detests Akuma for killing their master, Goutetsu, and for taking their martial art down a darker and undesirable path.

Gouken's special techniques in Street Fighter IV include the Gō Hadōken (剛波動拳, "Strong Surge Fist", spelled with a different kanji from Akuma's version), a variation of the Hadōken projectile techniques which he performs with only one hand, in addition to being able to launch them at an angle and delay their release, similarly to Urien's Metallic Sphere technique in the Street Fighter III series (he can throw two at the same time as an EX Move as well); the Senkugoshoha (閃空剛衝波, "Warping Strong Pierce Wave"), a technique in which Gouken advances (while passing through attacks and fireballs) towards his opponent in a pose similar to Akuma's Ashura Senku pose in Street Fighter EX and attacks with a powerful palm; the Tatsumaki Go Rasen (竜巻剛螺旋?, "Strong Tornado Spiral"), a vertical version of the Tatsumaki Senpukyaku; and the Kuchu Tatsumaki Senpukyaku (空中竜巻旋風脚, "Aerial Tornado Whirlwind Kick"), Ryu and Ken's Aerial Hurricane Kick from Street Fighter II: Hyper Fighting. 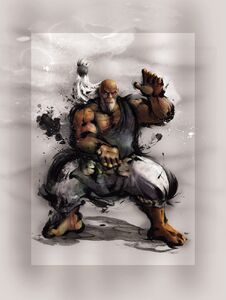 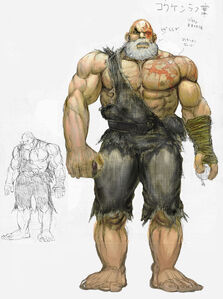 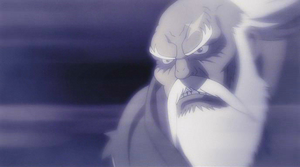 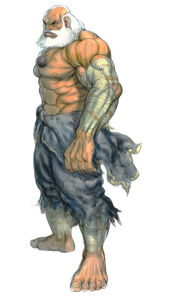 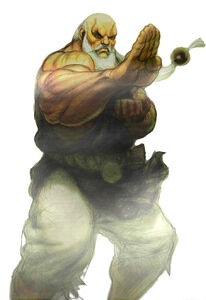