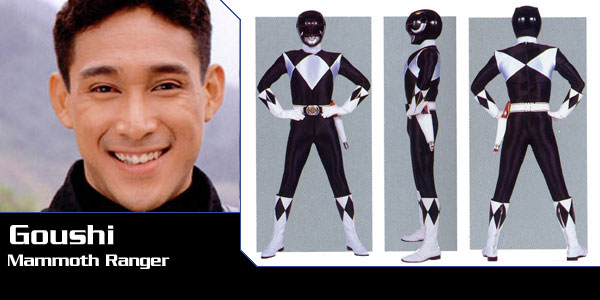 Sharma Tribe Knight Goushi シャーマ族ナイト ゴウシ Shāma Zoku Naito Gōshi is the MammothRanger (マンモスレンジャー) Manmosu Renjā of the Zyurangers, "Warrior of Wisdom". He is 27 years old (47 years old in Gokaiger). He was the serious member although he was also caring and good-hearted. He had an older sister named Otome, whose death by Witch Bandora made him vow to avenge her. He is the only member who can read their ancient writing. He serves as Geki's second-in-command.

When confronted with Geki losing it over Burai's fate, Goushi went to the greatest trouble of all to snap him out of it, for Bandora had released a Dora Monster that could restore the dead to life, Dora Narcissus. All they had to do was let it mature, reach its full power, and then bring it in contact with Burai. But the process of maturing and reaching full power meant the slaughter of helpless people. Bandora offered Geki the choice of letting the thing live when it was still vulnerable, or killing it. And when Dan tried to stab the thing, Geki whirled and caught the tip of the spear in his bare hands.

Dora Narcissus got away, and when they faced it again, Geki, determined to prove himself, ignored advice and went up against it alone, losing them the battle and letting the monster escape again. He could not apologize enough to the furious Goushi, who refused to look at him. At last, Goushi hit upon an idea to snap Geki out of it.

He disguised himself as a black knight, a fighter on Bandora's side, and kept the monster from killing Geki by telling it that the boy was obviously about to defect to their side. Anyone who put his own needs before the safety of others was a candidate for such. He eventually forced Geki into a fight, and when he finally took it to heart that he had to defeat the monster and find some other way to save Burai, he was very happy. He was also nearly dead, for Geki had fought the black knight at his best until he broke through the armor and destroyed it.

And then found to his horror that it was Goushi standing there, smiling at him, before collapsing. Geki gathered up Goushi in his arms. Daizyujin picked them up, and as Goushi recovered from the thrashing he had accepted to break Geki out of it, they fought and destroyed Dora Narcissus. After the final battle, the five went to heaven to the rest they all earned.

Retrieved from "https://hero.fandom.com/wiki/Goushi?oldid=810206"
Community content is available under CC-BY-SA unless otherwise noted.