Heroine, Sidekick
Gabriel Knight is the deuteragonist of the point-and-click adventure game series Gabriel Knight.  She is Gabriel's one time assistant, researcher and, eventually, investigative partner who helps him solve the various supernatural cases the pair come across.

Grace was born in Japan to very traditional Japanese parents. At age 3, her family moved to the USA . Her parents wished her to marry Mark Kobayashi, another Japanese immigrant, though Grace showed little interest in him. From 1983, she studied Tai Chi and got a Master's degree in History and Classics and was expected by her parents to gain a Ph.D. Instead, she took a hiatus and moved to New Orleans, Louisianna, in March 1993. She wanted adventure and "to clear her head", and to escape the oppressive tradition her parents were pushing on her. Having a love for old books and needing to pay her bills during her stay there, she took a job at St. George's Rare Books, a bookshop in the French Quarter run by Gabriel Knight.

Gabriel Knight: Sins of the Fathers

The Beast Within: A Gabriel Knight Mystery 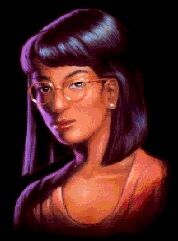 Grace Nakimura in Gabriel Knight: Sins of the Fathers
Add a photo to this gallery
Retrieved from "https://hero.fandom.com/wiki/Grace_Nakimura?oldid=2044436"
Community content is available under CC-BY-SA unless otherwise noted.