He is voiced by Ryōtarō Okiayu in the Japanese version and Chris Smith in the English version.

Grademon is Digimon with golden armor always carring two swords, He also has blue cape, when corrupted his armor turn to purple color.

Grademon is loyal and headstrong when fighting against an opponent, He often have a set of standards that other digimons of Bagra army do not have, He is also compassive and diligent when carries a promise, When finally purified and reminded of his opportunity to do the right thing, Grademon solifies his redemption when sacrificed to save Mikey from Tactimon, After been revived along with other redeemed enemies he joins the Fusion Fighters against Darkness Bagramon. 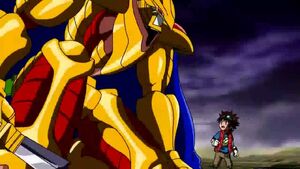 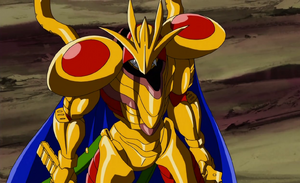 Retrieved from "https://hero.fandom.com/wiki/Grademon?oldid=1736465"
Community content is available under CC-BY-SA unless otherwise noted.