Creator of the Gummiberry Juice

Grammi Gummi is one of the main characters of Disney's Adventures of the Gummi Bears. She is the keeper of the Gummiberry Juice recipe to which she knows by heart. She is voiced by the late June Foray.

Grammi is the matriarch of the Gummi Glen Gummis. Grammi serves as a mother (and, for some of them, a grandmother, hence her name) for the group, cleaning and cooking (though her cooking can sometimes vary in quality). For a large part of the series, she is the only Gummi Bear to know the secret recipe for Gummiberry Juice in addition, which the bears need to bounce. She seems to have a rivalry with Gruffi as well. Although the both of them can work together whenever it counts.

Grammi was part of a small caretaker colony left to protect Gummi Glen after the majority of the Gummi Bears were forced to flee. She and the other Gummi Bears take a role as secret protectors of the nearby kingdom of Dunwyn after meeting a young squire named Cavin later on.

Grammi typically supplies the gummiberry juice that the Gummi Bears use to bounce, being the only bear to know the proper recipe. Because of this, she is targeted by Duke Igthorn occasionally, who desires the juice for its ability to induce super-strength in humans and ogres. Later, she makes an attempt to pass down the recipe to Sunni, who pays no attention to her lessons until the other bears are captured.

In "Gummies Just Want to Have Fun", it is revealed that Grammi had a childhood leprechaun friend named Nogum. Nogum appears and helps Grammi learn how to have fun again, much to the dismay of the other Gummies. He invites Grammi to go with him later on, but Grammi refuses, having realized that she was neglecting her responsibilities. 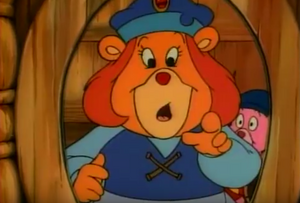