Grand Councilwoman
Your Majesty
Your Highness

Controlling the galaxy as leader of the Grand Council

The Grand Councilwoman is the leader of the United Galactic Federation. Others occasionally refer to her as "Your Majesty" and "Your Highness", and on the whole, she seems both reasonable and well-intentioned, although like many members of the United Galactic Federation, she knows almost nothing about Earth or its inhabitants. She is of an unknown species by name, but she seems to be reminiscent of the Greys, with hoof-shaped feet, big eyes and a big head. She is voiced by the late Australian actress Zoe Caldwell.

It seems that the Grand Councilwoman has a status as the supreme ruler of the Galactic Federation, and being a member of a council, it is reasonable to assume that she has been elected, although we have no idea how long her term lasts or when she was elected.

A fair but firm and very strict member of the Galactic Council, the Grand Councilwoman wishes to preserve order in the galaxy. She can be extremely temperamental at times, especially when those under her employment disappoint her. She does have moments where she shows mercy, however, being all about the rules.

When demoted to the position of secretary by Hämsterviel, she seems unfazed by it, but is clearly relieved to have her office reinstated after his defeat. Due to her limited knowledge of Earth and its various inhabitants (native or otherwise), she has had no qualms about either landing military forces there or even destroying the planet outright to prevent any threat to the Federation. However, she would much rather spare Earth than destroy it if another solution can be found.

In Lilo & Stitch, the Grand Councilwoman was first seen in a courtroom with the other Galactic Leaders during the trial against Jumba Jookiba. After asking Jumba's genetic creation, Experiment 626 (later named Stitch) if he could show some good in him – and his subsequent use of an apparent (alien) obscene phrase: "Meega, nala kweesta!" (which Jumba insists he did not teach him) in a show of refusal to do so – the Grand Councilwoman sentenced the Experiment to a life imprisonment on a maximum security asteroid and Jumba to prison. However, 626 escapes in a police cruiser. At first it seems that he will land in the water, where he will sink and drown, but when she sees that 626 will land in Hawaii, she suggests that they gas the island. Agent Pleakley tells her that the planet is a protected mosquito preserve and she later allows Pleakley and Jumba to retrieve 626. During the course of the movie, the Grand Councilwoman makes frequent calls to Pleakley, questioning what they are doing and why Experiment 626 has not been captured yet. In her last call to Pleakley, she loses patience and fires him and Jumba, sending Captain Gantu to finish the mission. At the end of the movie, the Grand Councilwoman arrives with her guards to capture Stitch herself. Gantu offers to explain, but the Grand Councilwoman finally plucks up the courage to tell him to be silent, and plans to retire him for following orders in a brutal manner and endangering the lives of others along the way. She then blames Jumba for Stitch's mishaps. Stitch then states that he found his new family on Earth. After learning that Lilo and Nani paid money for 626 (now named Stitch), and therefore legally own him, she allows him to stay with them in exile on Earth and announces that the family is under protection of the Galactic Alliance, saying they will be checking in on them every now and then. She also revealed that she had previously met Cobra Bubbles during the Roswell case, commenting that he used to have hair. She doesn't allow Jumba and Pleakley to board the ship with her, and she returns to the Federation.

The Grand Councilwoman is a supporting character. She made a brief appearance near the end of Stitch! The Movie to assist in the capture of Dr. Jacques von Hämsterviel. She witnessed when Lilo put Experiment 221 (by then christened Sparky) into the lighthouse, powering it up. Nevertheless, she thought that having Jumba's remaining 623 experiments loose on Earth was too dangerous, and voiced her decision to evacuate and destroy the planet. However, Lilo and Stitch managed to change the Grand Councilwoman's mind by convincing her to allow them the chance to find, capture and rehabilitate the experiments.

She returned as a major character in Leroy & Stitch, seen making Stitch a Captain of the Galactic Alliance, briefly as Dr. Hämsterviel's secretary, then giving awards when she resumes her position at the end.

In the anime series, the Grand Councilwoman was mentioned in the Japanese version when Jumba spoke to Pleakley about being given the tasks of watching over Stitch during his sudden rampage. She later appears in an episode when Stitch's robotic counterpart began causing trouble throughout the galaxy.

The Grand Councilwoman first appears during Terra's time in Deep Space, speaking with Gantu about a mysterious man's discovery as she witnesses an unconscious Terra in a prison cell. She is soon attacked by Unversed, fleeing along with Gantu.

She later appears during Aqua's first visit to Deep Space. Brought before the extraterrestrial by Gantu, Aqua is ultimately accused of being an intruder. The Grand Councilwoman was then about to scold Gantu for not attempting to capture Dr. Jumba and Experiment 626, when Aqua cut in stating that she had arrived to eliminate the Unversed that had prevented him from doing so. The Grand Councilwoman learned that her weapons did not work against the creatures, and asked Aqua to lend her strength. Aqua concurs, Gantu upset when the Grand Councilwoman gives his mission to her instead. The Grand Councilwoman then places Gantu on standby until she has another mission for him.

As Aqua eliminated the Unversed, the Grand Councilwoman soon had her report back to her with news on Jumba and 626. The fugitives on the departure deck, Aqua began to question the threat 626 really posed. When this was confirmed, Aqua did as told and came before the troublesome duo. Aqua later battled a vengeful Gantu, and the Grand Councilwoman arrived in the nick of time to stop him from destroying the Keyblade wielder after watching their battle on her security monitors. Taking Jumba and 626 back with her, the Grand Councilwoman was then asked by Aqua to spare 626's life. Not making any promises, she said she would contemplate the matter, but not before demoting Gantu back to patrol status. 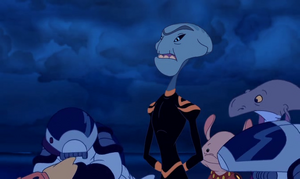 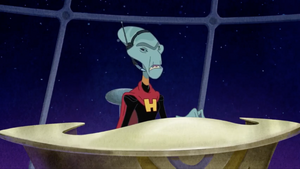