Legendary Hero from the Past
Grand Master Dashi was the supporting character of Xiaolin Showdown. He was the legendary Xiaolin Dragon and the only person that defeated Wuya 1500 years ago. According to the Ancient Scroll of the Shen Gong Wu, Dashi was the greatest Xiaolin Warrior of all time.

He was mentioned in the first episode of Xiaolin Showdown "The Journey of A Thousand Miles", telling the tale of how he trapped Wuya in a puzzle box 1500 years ago. At his side was Master Monk Guan and Chase Young, who was eventually turned evil by Hannibal Roy Bean in exchange for immortality and super-strength.

Grand Master Dashi used the Shen Gong Wu to defeat Wuya 1500 years ago. After he imprisoned her in a wooden puzzle box he got Dojo to hide the Shen Gong Wu around the earth to maintain the balance between good and evil.

It is also likely that in creating the Shen Gong Wu he created Mala Mala Jong. For his reasons for the Sapphire dragon and Mala Mala Jong is still unknown.

Role in the Show

When Wuya regained her power by Raimundo, Omi traveled to the past to get another Puzzle Box from Dashi. When Omi was looking for him, he found a sleeping man on the hay wearing a straw bamboo hat over his face. Omi was trying to tell him who Dashi was but he didn't care. However, Dojo comes in and blows his cover. Then Dashi made Omi win the Box after a Xiaolin Showdown and he gave him a new Puzzle Box.

He said that he challenged him in a Xiaolin Showdown for 2 reasons: it was funny to him and Dojo, and to learn to suspect the unsuspected. Omi asked him why he couldn't open it, Dashi told Omi it will open when it needs to. Omi asked Dashi a way back home, but as he didn't have any time traveling Shen Gong Wu anymore, he told him that he would need to figure it out on his own. So Omi froze himself, with the Orb of Tornami and came back into the present.

Later after Raimundo realized that his friends are the most important thing for him, he opened the box, releasing Dashi's ghost. Dashi saw Wuya and said "Wuya!, the years have not been kind". He flew, went through her, transformed her into a ghost and sucked her into the Puzzle Box. 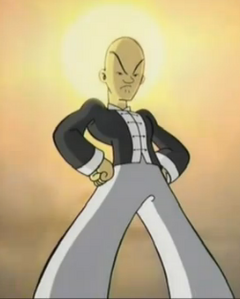 Retrieved from "https://hero.fandom.com/wiki/Grand_Master_Dashi?oldid=1804098"
Community content is available under CC-BY-SA unless otherwise noted.