Grandma Got Run Over By A Reindeer

Elderly Scapegoat
Grandma Spankenheimer is the wife of Grandpa, the mother of Frank, the mother-in-law of Rita, the grandmother of Jake, Daphne and Cousin Mel and is the titular deuteragonist of the 2000 film Grandma Got Run Over By A Reindeer.

She was voiced by Susan Blu.

Grandma runs a store in Cityville with her family and doesn’t wish to sell it to Austin Bucks, who owns the other properties in the town, much to the dismay of her older gold digging granddaughter Mel.

On Christmas Eve, Grandma takes her famous fruitcake (which unknown to her, has been spiked by Mel) and other baked goods outside with her, only to be run over by Santa Claus's sleigh. Jake witnesses this, but is unable to convince his family of it (as they don't believe in Santa). The next morning, Grandma has disappeared from the spot. Unbeknowst to everyone, Santa had taken Grandma back to The North Pole to nurse her back to health.

The following September, Jake manages to contact Santa and is brought to The North Pole by Santa's head elf Quincy. Upon arriving, he discovers Grandma there, but discovers that she is suffering from amnesia. Jake and Santa attempt to restore Grandma's memories by taking her back to Cityville.

Upon arriving back in Cityville, Jake and Santa go to Austin Bucks whilst Grandma stays in the sleigh. However, she is tricked into coming with Mel and her attorney IM Slime, who then accuse Santa of kidnapping Grandma. They keep Grandma in a cabin for three months, but she is rescued by Jake and Quincy, who also discover a note that Santa had written explaining what had happened (which Mel had found and hidden from the rest of the family) and a vial of the ingredient Mel had used to spike Grandma's fruitcake, which acted as "reindeer nip".

Jake and Quincy are able to restore Grandma's memory by feeding her fruitcake and tell her what has happened. They then head to the courthouse and reveal the truth that Mel was behind Grandma's second disappearance. After Mel is jailed, Austin Bucks approaches Grandma and tells her that be wishes to franchise her store throughout the country after seeing how much Grandma values the store and her family.

Afterwards, Grandma accidentlly picks up the spiked fruitcake again and is once again hit by Santa's sleigh. Fortunatly, she’s alright and doesn't get amnesia. 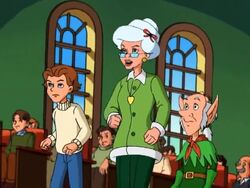 Grandma with her grandson Jake and Quincy
Community content is available under CC-BY-SA unless otherwise noted.
Advertisement