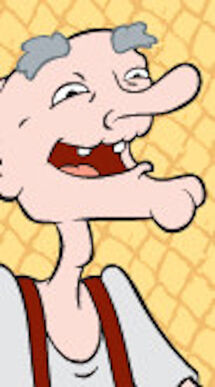 Phil is the major character of the Nickelodeon animated series Hey Arnold!. He is Arnold's paternal grandfather and Gertie's husband. He runs a Sunset Arms boarding house.

Retrieved from "https://hero.fandom.com/wiki/Grandpa_Phil?oldid=627546"
Community content is available under CC-BY-SA unless otherwise noted.