Great Fairies are large humanoid fairies that have appeared in various Zelda titles. Their main purpose is to heal Link whenever he is wounded and will also recover his magic power in games such as Ocarina of Time and Majora's Mask. In other titles, like The Wind Waker and Four Swords Adventures, they also bless Link with new items, powers or upgrades of his existing equipment. The Great Fairies' appearances differ vastly between games, and most of them can be found living within a Great Fairy Fountain. 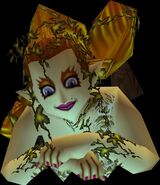 Great fairy ww.jpg
Add a photo to this gallery
Retrieved from "https://hero.fandom.com/wiki/Great_Fairy?oldid=1611792"
Community content is available under CC-BY-SA unless otherwise noted.