Zen-Oh's attendant and most trusted advisor

Co-ruler of the Multiverse

Help Zen-Oh test the virtue of mortals with the Tournament of Power.

The Grand Minister, formally styled as the Grand Minister to the Omni-King(s), is a supporting character in the 2015 Japanese martial arts fantasy manga series Dragon Ball Super and its 2015-2018 anime television series adaptation of the same name.

The Grand Minister was the father of all thirteen of the known Angels and the personal aide to Grand Zeno, the King of All. Considered to be the strongest warrior in the Multiverse, the Minister regulated the actions of his children and used them to implement the will of the Omni-King upon the Multiverse.

He was voiced by Masaya Takatsuka in Japanese and Josh Grelle in English.

Despite the extremely phenomenal, godly power and authority he wields, being easily the third most powerful character in the series, with only Zen-Oh and Super Shenron above him, the Great Priest maintains a calm and polite demeanor with none of the arrogance and demanding behavior most gods show. This is shown by how he is among the few Gods who is not at all bothered by Goku's informal behaviour. He is polite to his subjects even if he commands them. The Great Priest also seems to be interested in those who can reach levels beyond their limits and is willing to praise them. When Goku brought the Future Zen-Oh to the present timeline, Great Priest is revealed to be envious of Universe 7 and also would visit the universe sometime. Likewise, when Goku managed to achieve Ultra Instinct, the Great Priest showed clear interest in the capabilities of his son's pupil and when Goku came to Zen-Oh's palace to save himself, the Great Priest would not only heal Goku but also train him to increase his power and would show pride in seeing his performance.

While initially thought to have been amoral and even sadistic towards the erasure of the Universes, it was later revealed that the Great Priest was aware of and fully supported Zen-Oh's use of the Tournament of Power to test the virtue of Mortals. Hence, it can be assumed that like with Zen-Oh, the Great Priest actually had no intention of causing any permanent harm and only wanted to teach the universes a lesson on the power of wishes and why they shouldn't be used so casually and also not to take their battle power for the granted. He looked genuinely pleased and satisfied of Android 17's wish to resurrect all the Universes and openly praised Universe 7 not only for their battle power, but for their selflessness. Although keeping a professional attitude, the Great Priest has shown that he does care towards his children, wishing to not lose an angel even if they were troublemakers. He was visibly displeased when Merus was erased and was willing to resurrect him and allow him to live the life he always wanted.

The Great Priest is said to be one of the five highest fighters in the Multiverse by Whis. He can be considered the third most powerful character in the series, under only Zen-Oh and Super Shenron, with Whis describing him as the strongest even among those five warriors, making him the strongest fighter in the entire multiverse. Said to be far stronger than Whis, he is therefore the strongest Angel in the series and is exceedingly superior to the Supreme Kais and Gods of Destruction, as evidenced when both Supreme Kais and Gods of Destruction are terrified of the Great Priest and would immediately kneel in his presence and do almost, if not, anything that the Great Priest orders, implying he is capable of easily killing them if they dare challenge him, and he proved strong enough to block punches from Beerus and Quitela with his finger and capable of remaining unfazed by Rummshi's Battle Roar. It has also been said by Whis that he is the most powerful master of Ultra Instinct, far outperforming him. In the Dragon Ball Heroes series, he proved to be an extremely competent teacher, as within a matter of days, he was able to effectively train Goku to better utilize Ultra Instinct. He also displays the ability to eradicate a being as powerful as his children without even being in the same area and afterwards resurrect said eradicated being from existence, as shown by how he was able to easily kill and then revive Merus. 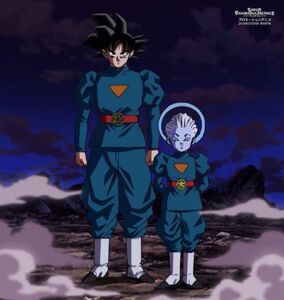 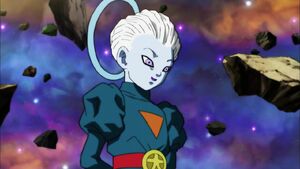 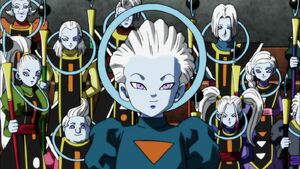 The Grand Minister and his family congratulating Universe 7 on passing the test of virtue.