Great Prince of the Forest

The Great Prince of the Forest

Bambi, a Life in the Woods

Great Prince of the Forest (formerly)

The Great Prince of the Forest is Bambi's father, the husband of Bambi's Mother, Faline's father-in-law, Geno and Gurri's paternal grandfather and the head of the forest until Bambi succeeds him. He appears in the 1923 book Bambi, a Life in the Woods as a major character, it's 1942 film adaption Bambi as a minor character and it's 2006 midquel Bambi II as the deuteragonist.

He was voiced by the late Fred Shields in the first film and Patrick Stewart in the second film who also portrayed Charles Xavier in the X-Men film series, and Jean-Luc Picard in the Star Trek: The Next Generations series and Star Trek: Picard TV series.

The Great Prince appears as a minor character in the film. He has a few scenes in the film only. He first appears at the start of the film looking down at the newly born Bambi and his mother after their visit from the other forest animals. He later appears when he arrives at the meadow, causing the other bucks and does there to be silent and watch him walk by and also walks past Bambi and shares and glance at him before leaving the meadow. Seconds later, the Great Prince rushes back to the meadow to alert the other deer of Man's arrival and leads Bambi back to his mother as they flee to safety with the other deer.

He next appears in the winter shortly after Bambi's mother is killed by Man and finds Bambi wondering in the snow calling for his mother. The Great Prince tells Bambi that his mother can't be with him anymore before telling Bambi to come with him and addresses him as his son.

The Great Prince next appears years later where he sees a now young adult Bambi overlooking a campsite and tells his son that Man has returned and they must go deep into the forest before telling Bambi to follow him. Bambi starts to follow his father, but turns back to look for his mate Faline.

The Great Prince discovered that Bambi didn't follow him and finds his son who had been shot by Man and urges him to get up and tells him to follow him which Bambi does. Due to Man's carelessness, a forest fire starts, but luckily both The Great Prince and Bambi get to safety and met up with Faline and the other surviving animals.

The Great Prince is last seen at the end of the film where he and Bambi look down at Faline who has given birth to her and Bambi's children Geno and Gurri. The father and son share a glance before the Great Prince turns and leaves, leaving Bambi to be the Prince of the Forest.

The Great Prince appears as the film's deuteragonist. He has more scenes of screen-time than in the original film. Taking place in between the events of Bambi's mother's death and Bambi's young adulthood, the film shows how the Great Prince raised Bambi. He first appears when he finds Bambi and tells him that his mother can't be with him anymore before telling him to come with him and takes Bambi to his den. After Bambi goes into the den, Friend Owl arrives and is asked by the Great Prince to find a doe to raise Bambi. But due to it being winter, Friend Owl won't be able to find a doe until spring so the Great Prince has to care for Bambi until then.

One day, the Great Prince allows Bambi to go with Thumper and his sisters to see the Groundhog (who if he couldn't see his shadow meant spring would come) and says he will meet him later. Later that day, Bambi whilst waiting for his father, falls asleep and dreams about his mother and wakes up hearing her voice and goes out into the meadow before discovering that it is in fact Man tricking him who then along with his dogs tries to kill Bambi, but luckily, the Great Prince arrives in Tim and gets Bambi to safety. He then scolds Bambi for falling for the trick and for freezing in fear instead of running. When they reach the den, Bambi questions if his mother is coming back to which the Great Prince says no.

Sometime later, the Great Prince witnesses Bambi jump over a large chasm (due to him and Thumper being chased by Ronno) and is impressed. The father and son begin to bond after Bambi asks his father about his duties.

One spring day, as the Great Prince and Bambi play, Friend Owl arrives and reveals that he found a doe to care for Bambi named Mena. At first, Bambi is happy to meet Mena after hearing that she grew up with his mother but when he realizes her purpose, he gets into an argument with his father, going as far to say that he wished his mother was here instead of his father. After this, the Great Prince watches Bambi leave with Mena.

Later, the Great Prince finds Mena trapped in a snare and frees her before asking where Bambi (who had driven Man's dogs away from Mena) is. He sees Bambi drive off Man's dogs, but as he goes over to him, the cliff Bambi is on collapses and the fawn plummets down below, to the Great Prince's horror. He finds Bambi and believes that he is dead but, luckily Bambi wakes up, to the happiness of the Great Prince who embraces his son.

Months later, the Great Prince takes a now teenage Bambi through the forest to a glade and tells his son that this is where he first met Bambi's mother and he was about Bambi's age. When asked by Bambi what he was like, the Great Prince replies that he was muck like Bambi. 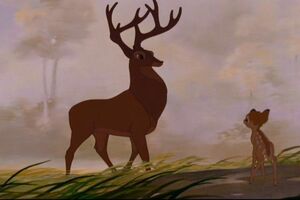 The Great Prince with his son Bambi 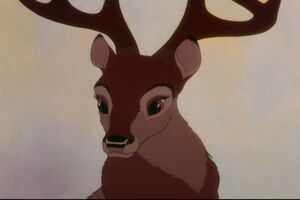 The Great Prince of the Forest having a close look at his son, Bambi for the first time. 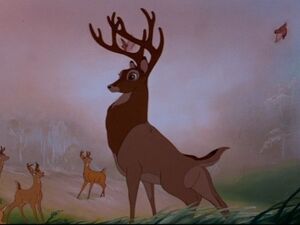 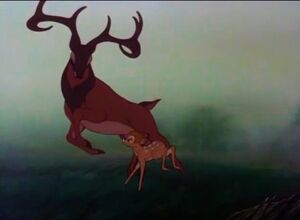 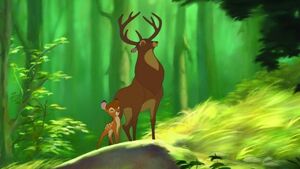 The Great Prince and Bambi in Bambi II 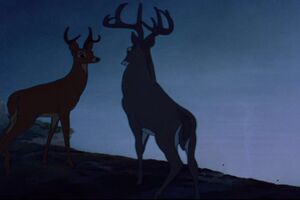