Chiefs of the Bounty Hunters' Guild

To get revenge on Din Djarin for saving the Child, breaking the Code, and nearly killing him (formerly)

Fight against the Empire (ongoing)
Protect the Child (ongoing)

Greef Karga is a supporting character from the Disney+ live action Star Wars television series, The Mandalorian. Once a magistrate until his forfeiture, Karga became the leader of the Bounty Hunter Guild. Based on the planet Nevarro, Karga once entrusted Din Djarin, whom he praised as a "legend" and best bounty hunter among the Guild, with a remnant of the fallen Galactic Empire, and this led to some unexpected events.

Greef is portrayed by Carl Weathers and was regarded as a breakout character by the showrunner himself, and appears as a recurring character in the show. Despite originally intending to have no concern over the Child, he has a change of heart and becomes a useful ally to the Mandalorian rather than a mission giver.

Greef is a dark-skinned man of average height with black hair and brown eyes, and a faintly seen white beard and mustache. He wears a brown jacket over a light brown shirt, brown gloves, and a bandalier.

Most of the time, Karga is a laid-back businessman who would not let a good deal escape him. Due to being part of an outlaw environment, Karga has very little consideration for the morals or the life of someone else but that does not prevent him from having a moral code. He does show a selfish side, as seen when Mando broke the Guild code to save The Child. Karga did not hesitate to try and kill him after that despite all the times Mando did a good job for him. When he allied with Mando to bring down the Client, Karga had actually planned to betray him, showing both a pessimistic and a treacherous side.

However, Karga still has a certain code of honor as when the Child saved his life, he resigned himself from his plan of betrayal and collaborated with Mando against all the Imperial vestige. Once the enemy was defeated, Karga was grateful and even offered Mando to return to the guild.

Greef Karga's background has been uncovered to little extent, though it was revealed that he was once a magistrate before being disgraced for unspecified reasons.

Four years after the Battle of Jakku which saw the total defeat of the Empire and the appearance of the new Republic, Karga operated from the volcanic planet Nevarro as an agent of the Bounty Hunters Guild. At one point, he met the lonely Mandalorian Din Djarin, better known as his sobriquet "The Mandalorian" and nickname "Mando", who later became what has so far been confirmed as his top bounty hunter, although their relationship was mostly only professional.

Working with The Mandalorian

In "The Mandalorian", Greef Karga welcomed Mando in Nevarro's cantina for his capture of an unidentified Mythrol and wanted to pay him with Imperial Credits but ended up giving him Calamari Flan when Mando judged the Imperial Credits as worthless since the Empire no longer exists. Karga then made a list of the next potential targets available but Mando refused them all, and Karga admitted that there was a lack of work available, especially assignments worth Mando's time as he was the most expensive bounty hunter, as stated by the Client, who Greef sent to for Mando's next mission. Greef told him that no information about the mission was available, and that he'd have to talk to the Client in person.

In "The Sin", following Mando's success in the mysterious mission, Karga received Beskar as thanks from the Client for commissioning a bounty hunter capable of retrieving the mysterious Child, who was the same species as Yoda. In the cantina, Karga berates another bounty hunter who failed in the recovery mission and dismisses him before Mando arrives, dressed in new Beskar armor. Karga compliments Mando while informing him that all the other bounty hunters now hate him for succeeding where they all failed. Mando questions Karga about what the Client plans to do with the Child, but Karga ignores him because he has not requested it due to the guild code before telling Mando that even though the Client and his factions are former members of the Empire, it didn't mean anything anymore since the Empire fell apart. Karga then gives Mando another target after the Mandalorian didn't want to take a rest.

Dealing with a traitor

Later, a remorseful Mando rescued the Child from the remnant of the Empire, reactivating the sensors locked on the Child. Accompanied by several members of the Guild, Karga blocked the path of Mando heading towards Razor Crest, Mando's ship. Karga demanded that Mando return the child to them, but when the Mandalorian refused, the exchange of gunfire began. While completely surrounded, other Mandalorians hiding on Nevarro come to Djarin's aid, causing the Bounty Hunters to retreat. Unfortunately for Mando, Karga had entered the Razor Crest and hid under the upper deck to ambush Mando and took aim at him with his blaster but Mando foiled him by activating the carbonic device, blinding Karga and allowing Mando to fatally shoot him and throw him out of his ship. Karga was only able to survive the shooting thanks to the Beskar paddle that he had placed in his pocket next to his heart.

Dealing with the Client

In "The Reckoning", Greef contacts Mando to inform him at the same time of his miraculous survival and also that after the skirmish, the Client and his forces have seized power over the town of Nevarro. As the Imperial occupation is a terrible problem for his business, Karga offers Mando an alliance to eliminate the Client, which would make it possible to stop the bounty hunters in pursuit of the Child.

Later, Karga reunites with Mando, who was accompanied by the former shock trooper of the rebellion Cara Dune and the Ugnaught Kuiil in the volcanic plain of Nevarro. Despite his skepticism of the ex-trooper when he approaches the Imperial Remnant, Karga invites Mando and his friends to head for the city. At nightfall, the group is attacked by poisonous flying reptiles and lose some of its members. Wounded during the attack, Karga is dying from the poison until the Child uses the Force to heal him, much to his thanks.

Arriving in sight of the town, Karga shoots down his last two men and admits to Mando and Cara that he planned to kill them and return the Child to the Client but after the little green creature saves his life, he does not. could no longer bring it about. He gladly accepted that the duo shoot him down right away while warning them that as long as the Client is there, the Child will still be in danger. Mando realizes Greef is right so he forms a plan to approach the Client and kill him.

As Kuiil brings the Child back to Razor Crest, Karga pretends to be the one who captured Mando while accompanied by Dune. At the entrance of the city, a Scout Trooper offers twenty credits for the helmet, which Karga refuses on the pretext that it will end up on his wall. In the cantina, the number of Stormtroopers protecting the Client is more numerous which is a problem and it does not get better when the Client contacts his superior Moff Gideon who has the old man and his stormtroopers disposed of as if they were worthless, before completely surrounding the cantina with all of this imperial troopers.

In "Redemption", surrounded by Gideon's army, the group unsuccessfully tries to enter the sewers to escape the army's heavy artillery, particularly frightened at the sight of an E-Web cannon, but their only access point is blocked. Outside, Gideon taunts their panic while evoking the names and background of each member of the trio, including Karga's former magistrate role before offering them one last chance to surrender or die.

The unexpected arrival of the reprogammed IG-11 assassin droid accompanied by the Child allows the trio to repel Gideon's forces. Unfortunately, Mando is badly injured by the explosion of the E-Web which forces them to retreat into the cantina. Now stating that he is a nurse droid, IG-11 tends to Djarin's wounds, forcing Mando to reveal his face. After narrowly escaping an Incinerator Strormtrooper using the Child's powers, Karga, Cara, and the Child flee into the sewers while IG-11 remains protected from a dying Mando.

Walking through the sewers to find the other Mandalorians, Karga and Cara are joined by IG-11 and a partially recovered Mando. Reaching the Mandalorian covert, the party only find a discarded pile of armor. Mando accuses Karga of having his comrades killed until the Armorer shows up and confirms that Karga had nothing to do with it. The group then fled to the lava rivers before the Stormtroopers invaded.

Navigating the river of lava, the group discovers an ambush of Stormtroopers at the exit of the sewers. To ensure the Child's safety, IG-11 self-destructs in front of stormtroopers, allowing humans to escape. As all seems over, Gideon attacks the trio aboard a TIE Fighter flying in the sky. Mando ends up defeating Gideon by hanging a bomb on the wing of his TIE Fighter, which explodes mid-flight. Karga congratulates Mando on his victory and states that with the vermin gone, Nevarro is finally once again a respectable place just for Mando to clarify that it is only for bounty hunters. Karga offers his friend to return to the guild, even granting him the right to choose his bounties above all others but the Mandalorian declines because he must now bring back the Child among his species. Karga agrees and makes Cara Dune a member of the guild before bidding Mando farewell, adding that it will surely be the Child who will watch over Mando.

Mando reunites with Greef Karga and Cara Dune in the Season Two episode Chapter 12: The Siege. Before they go on their mission to destroy an Imperial base, Greef promises a safe place to keep the Child in the meantime. After putting the Child in a school of children taught to by a protocol droid, the Child shortly becomes a spectacle among the children, and was seen stealing macarons from a student before showing Mando, Karga, Dune, and the unidentified Mythrol Mando captured a while ago arrive at the Imperial base in a speeder bike. The Mythrol makes many complaints, but Greef was the one who forced it to come, and coerced him to accompany them. Inside the base, the Mythrol reluctantly deactivates a lava cooling system without falling into the lava himself, and then the four of them start their escape. During their escape, they find a laboratory with human clones where information involving unethical experimentation with the Child was planned. After being spotted by Stormtroopers, they plot their escape.

Stealing an Imperial transport vehicle, Cara Dune drives the vehicle as fast as she can to evade the chasing stormtroopers, clearly enjoying the bumpy ride. Greef made their escape possible by mounting the turret, and shot down the stormtroopers, at one point killing one by brutally shooting it at point blank range. At the appearance of TIE Fighters, the turret Greef was mounting was destroyed, but Din arrived in time to save them from the TIE Fighter Pilots, all 3 of them working together perfectly to make their escape possible. Mando was able to save them because before Cara and Greef entered the vehicle, Mando intentionally flew to his Razor Crest using his jetpack. Their mission succeeds with the destruction of the base, perfectly as planned. 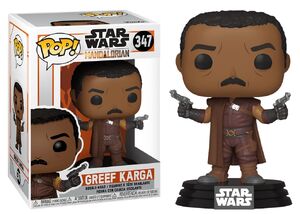 Retrieved from "https://hero.fandom.com/wiki/Greef_Karga?oldid=2137496"
Community content is available under CC-BY-SA unless otherwise noted.