Green Arrow, aka Oliver Queen, is a hero in the DC Universe, and a member of the Justice League.

Much like Batman, Oliver Queen was born into a life of luxury. Unlike the Caped Crusader, Oliver grew up a spoiled billionaire. But he was in for the rude awakening of his life. While on a yatch trip, Oliver was stranded on a deserted island for one year. Rather than let nature take its course, the young man decided to make the best of the situation; He remembered his love of archery from his childhood, so Oliver created specialized arrows to use for catching food and taught himself the ways of the archer. He also made a suit of palm tree leaves for clothes. Escaping from the island via commendering a boat from a crew of criminals (who mockingly referred to him as Green Arrow due to his suit). Oliver decided he would use his new skills to fight crime under the alias of the Green Arrow. Years later, after being robbed of his fortune and company by a corrupt partner, Oliver became more of an anti-hero. He was willing to break the law in order to protect innocent people. Over all though, he is still a super hero, taking down not only supervillains, but every day villains as well.

Green Arrow has no superpowers, but is so skilled an archer, he's been dubbed the world's greatest archer.

Green Arrow in the comics 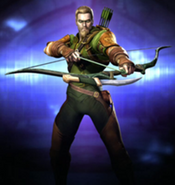 Oliver Queen, as he appears in Regime universe

Green Arrow in Batman: The Brave and the Bold
Add a photo to this gallery
Retrieved from "https://hero.fandom.com/wiki/Green_Arrow?oldid=439661"
Community content is available under CC-BY-SA unless otherwise noted.