Green Lantern (real name Guy Darrin Gardner) is a fictional character and mega-superhero from DC Comics and its universe, appearing as a major character in the Green Lantern comics.

He is a core and top member of the Green Lantern Corps, and is one of the founding members of Justice League International. He is known for his brash and arrogant attitude, but also his strong sheer-will and compassion to protect the world and his sector from threats. It's possible that history will determinate that Guy to be the greatest Green Lantern, but he is in competition with fellow Green Lanterns Hal Jordan, John Stewart, and Kyle Rayner.

He was created by John Broome and Gil Kane, and first appeared in Green Lantern vol. 2 #59 in March of 1968.

(NOTE: the following is the pre-New 52 origin)

Among the many mistakes they've made in their millenia of existence, making Guy Gardner a Green Lantern is probably one of them. The by-product of an abusive childhood, Guy managed to have a promising career as a football player in college until an accident forced him to quit. Landing a job as a caseworker for a prison, Guy made friends with one of his charges and future fellow GL, Hal Jordan.

After working as a special needs gym teacher, Guy was one of the two men chosen to be the new Green Lantern of Sector 2814, but since Hal was closer, he got Abin Sur's ring, with Guy being his back up. A series of later incidents altered Guy's personality, turning him into a rude, brash, obnoxious, aggressive, arrogant jerk who somehow managed to become a founding member of the Justice League International.

Though most of his "friends" (they use the term lightly) find him to be a regular jackass, Guy has also shown to have the soul of hero and has proven his worth time and again....when he's not arguing with his fellow GL's, or getting decked by Batman.

Guy Darrin Gardner was born in Baltimore, Maryland to Roland and Peggy Gardner, and is the younger brother of Mace Gardner. As a child, Guy was abused by his alcoholic father, and idolized Mace, who later became a cop. Guy would attempt to impress his parents, but eventually gave up and dealt with his father's abuse. Seeing that he couldn't be as good as his brother, Guy became a juvenile delinquent, and later a criminal. After his eighteenth birthday, Mace straightened him out after Guy stole a car, telling him to get a job.

Guy decided to get himself together, working hard in school, getting a job and going to the University of Michigan. Guy also was an aggressive individual, and let his aggression out by playing undergraduate football at Michigan. It was later revealed that Mace was a dirty cop after drug dealers shot him and left him paraplegic, and later committed suicide by drowning himself. Despite losing his brother, Guy went to earn degrees in both psychology and education, and worked as a counselor and a gym teacher in special education. Eventually, he made peace with his father, who was dying of liver failure and spent a week wit him before he died.

When Abin Sur crash-landed to Earth and was dying, two most worthy men to wield his ring were Gardner and Hal Jordan, and the latter was chosen because he was closer to crash site. Despite not being given Sur's ring, Gardner was still chosen to be a Lantern if anything should happen to Hal. When Jordan learned of this, he journeyed to Baltimore and joined the Men's Club to find Gardner, becoming fast friends with him. Unfortunately, Guy was hit by a bus, and the Guardians chose a new backup for Jordan in John Stewart. While in the hospital, Guy met a gypsy named Kari Limbo, who told him that he a great destiny ahead of him.

Gardner finally got his chance when Hal's ring was damaged by the Crumbler, and Guy worked with Green Arrow to take down Professor Ojo. However, Guy was presumably killed when Hal's power battery exploded in his face and disappeared from the earthly realm. Hal and Kari mourned his presumed his death, and the two later fell in love and Hal later proposed. It was revealed at Hal and Kari's wedding that Guy was still alive and was transported to the Phantom Zone. Guy was brainwashed by the Zonners, and teamed up with General Zod to fight Hal and Superman. Though Hal barely survived his escape from the zone, he returned to rescue Guy and discovered that Sinestro had kidnapped him and taken him to the Antimatter Universe of Qward. After defeating Sinestro, Hal brought Gardner back, but the latter was in a comatose state that he wouldn't come out of for several years.

During the Crisis on Infinite Earths, Guy awoke from his coma, and wished to take back the power ring and the title. Guy learned that Hal decided to retire, and that John Stewart was the active Green Lantern on Earth, and the two fought. Although the Guardians required an additional Green Lantern for the crisis, Hal was invalid since he retired, so Guy was given a ring of his own. Later on, Guy was tasked by the Guardians to destroy the moon of Qward, where the Ant-Monitor had been born. Guy assembled a group of supervillains, but when the Guardians learn that destroying Qward would make the Anti-Monitor stronger, the group ordered the Green Lantern Corps to stop Gardner.

Gardner was stopped by Stewart, and Hal was reinstated as Guy briefly went missing after the event. Still bearing a grudge against Hal, he teamed up with Star Sapphire and Hector Hammond since he believed himself that he was meant to be the last true Green Lantern. Despite his actions, the Guardians still saw potential in Gardner, and had him assigned to be mentored by Appa Ali Apsa when the Guardians briefly left the universe.

Guy Gardner has past training as a criminal and football player.

Guy wields a Green Lantern ring, allowing to create construct by his sheer will.

During his time as Warrior, Guy's Vuldarian DNA gave him a formidable set of powers: superhuman strength, shapeshifting, organic weapon production (the ability to grow weapons from your body), energy projection and absorption, and a regenerative healing process 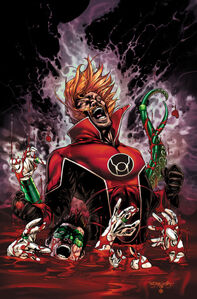 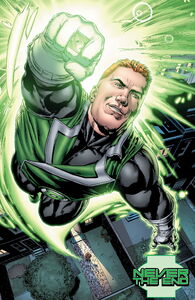 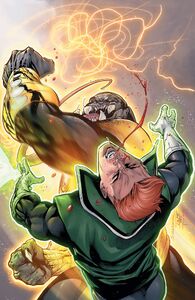 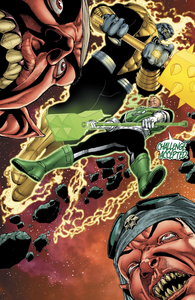 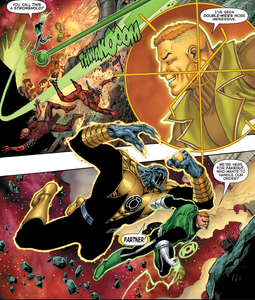 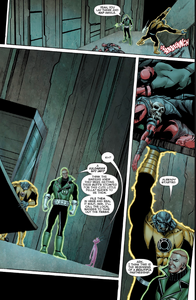 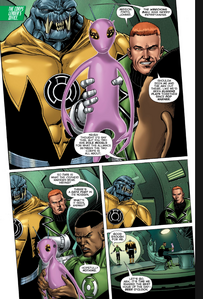 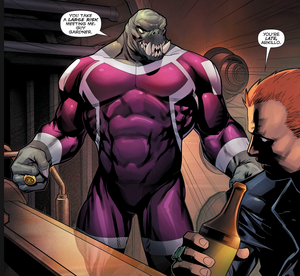 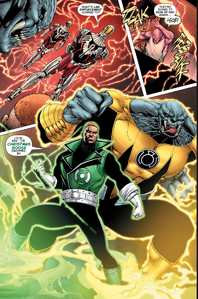 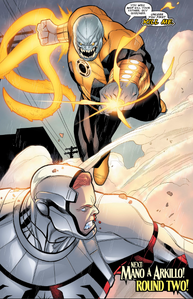 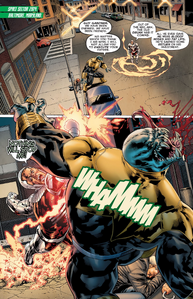 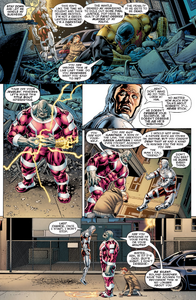 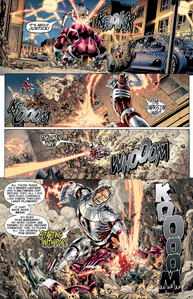 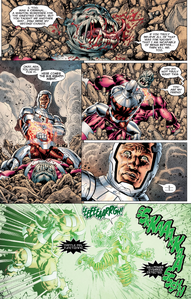