Green Lantern (real name Kyle Rayner) is a fictional character and superhero from the DC comics, appearing as a main or major protagonist of the Green Lantern comics.

He was created by Ron Marz, Bill Willingham and Darryl Banks, and first appeared in Green Lantern Vol. 3 # 48 in January of 1994.

Rayner was an artist who worked in Los Angeles and living a modest life with his mother. Kyle's father was a CIA agent who abandon his mother when she was pregnant. One day, one of the last Guardians entrusted the Green Lantern ring to Kyle Rayner to combat Parallax.

Tragically though one area where Kyle Rayner has never succeeded in is love. None of his romantic relationships with women have worked out and in fact a good many of his love interests end up dead.

Kyle Rayner was born in North Hollywood, Los Angeles, California to Aaron and Maura Rayner, and became a gifted freelance artist during his youth. Green Lantern Hal Jordan became grief-stricken when his hometown, Coast City was destroyed, and went on a rampage by killing members of the Green Lantern Corps and most of the Guardians of the Universe. The last surviving Guardian Ganthet found Rayner, and gave him the last Green Lantern ring, and it's unknown why Kyle was chosen despite being in the right place at the right time.

Kyle went to Alexandra DeWitt, his ex-girlfriend to show that he was a Green Lantern, and she decided to help him. After his first adventure, everyone thought he was Hal Jordan, and Alexandra recommended that he redesign his costume to distinguish himself from Hal Jordan. Despite getting a new costume, Mongul attempted to destroy Rayner, looking for revenge against Green Lantern for his defeat in Engine City. After defeating Mogul, the alien was surprised that Rayner's ring could work against his skin, and Superman was shocked that the new Green Lantern knew nothing about Hal Jordan or the Corps.

Alexandra continued to help Rayner in his new role, helping him train and the eventually rekindled their relationship. Tragically, she was murdered by Major Force, who was sent to learn the truth about the new Green Lantern after a government operative recovered the final battery. Kyle confronted Major Force, who showed the battery to him during their fight, allowing him to recharge his ring to defeat the supervillain. Kyle stopped himself from killing Major Force, and was approached by the Green Lantern Alan Scott, who told him about the history of the Corps. In addition, Scott warned Kyle of Hal Jordan's fall into madness, and warned him that they would have to confront the fallen Green Lantern.

In Zero Hour, Hal Jordan returned and became Parallax, and joined with Extant to reshape the universe itself. Hal was confronted by many heroes, and their battle nearly destroyed all of space and time, he was defeated. In the battle, he disappeared with Kyle, and both had ended up on Oa, where Parallax attempted to absorb more energy from the planet. Kyle fought against Parallax, and had to detonate Oa to stop Hal's madness, and became lost in space as a result. After getting his ring back from a former Green Lantern, Rayner returned to Earth and decided to take up residence in New York City.

Kyle briefly worked with former Green Lantern Guy Gardner, and the two worked together to defeat Major Force. After defeating the supervillain, Kyle chose not to kill him, but Gardner didn't hesitate to kill him, but it was later revealed that Major Force survived. Parallax returned to Earth and demanded the last power ring, but Rayner proved himself to be more than worthy to bear the name Green Lantern.

Rayner later met Wally West during a battle against Sonar, and the Flash didn't like the new Green Lantern at first (due to having growing up with Hal). The two managed to get past their differences, and both became close friends after defeating Sonar. Kyle later met Superboy while investigating the Silicon Dragons, and the two superheroes encountered a mutated Black Manta. Kyle became a little bit on edge when Superboy brought Sam Makoa along, as it reminded him of losing Alexandra as a person who didn't have any super powers. After defeating Black Manta, Kyle and Superboy became good friends. Kyle would later go on to date Donna Troy, but she briefly broke up with him after still dealing in the aftermath of her divorce.

Despite his heroics, Kyle began to question his abilities and what it mean to be a superhero, and asked for advice from heroes, including Batman, Wonder Woman, Captain Marvel and Sentinel. After getting advice from them, he redirected himself to his new role, and Donna Troy returned to Earth ask him to come with her to Rann. Kyle worked with Donna, John Stewart and the Darkstars to stop Darkseid's son, Grayven from invading Rann.

The heroes succeeded in defeating Grayven, although Stewart was injured in the battle and left paralyzed as a result. Kyle took Donna and Stewart back to Earth, and the new Green Lantern and Donna decided to rekindle their relationship. Back on Earth, Kyle met with Connor Hawke, the new Green Arrow, and the easily became good friends due to both being in similar situations at the time, as both were successors trying to fill in their new roles.

Soon after, the Sun-Eater was attempting to envelop the Sun, and multiple heroes attempted to stop it, to no avail. Kyle sought Parallax at the Source Wall, and pleaded with Hal to return and save the Earth from the Sun-Eater. Hal eventually came back to Earth, and decided to try and redeem himself from his past actions, and succeeded in destroying the Sun-Eater at the cost of his life. A memorial was held in Coast City for the former hero, and Kyle was placed on the charter for the Justice League after the team saved the Earth from a renegade group of White Martians.

Kyle Rayner as a Green Lantern. 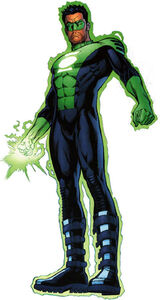 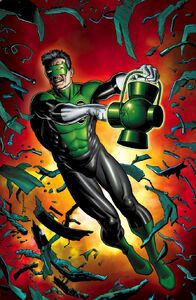 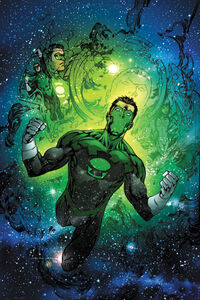 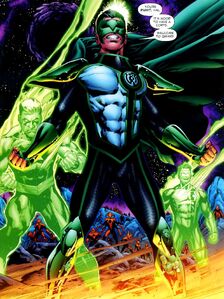 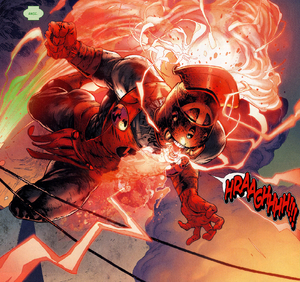 Kyle Rayner as a Red Lantern. 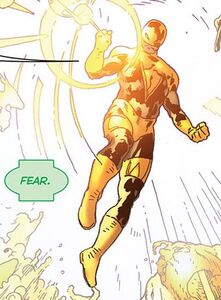 Kyle Rayner as a Yellow Lantern. 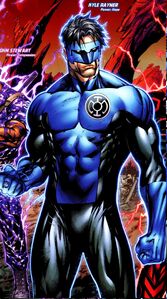 Kyle Rayner as a Blue Lantern. 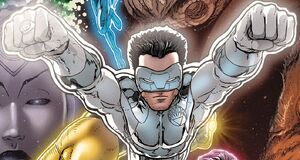 Kyle Rayner as The White Lantern. 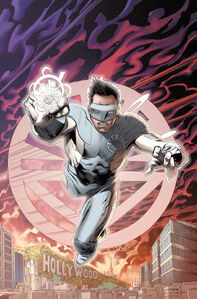 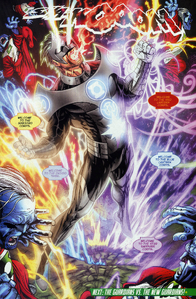 Kyle Rayner as the Hybrid Lantern. 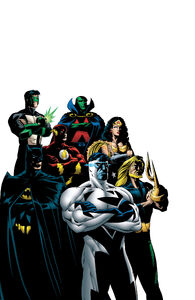 Rayner with the Justice League of America. 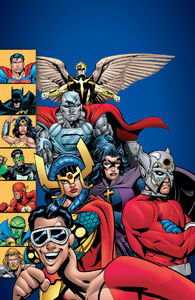 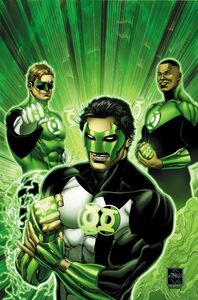 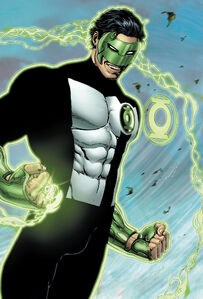 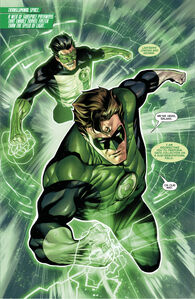 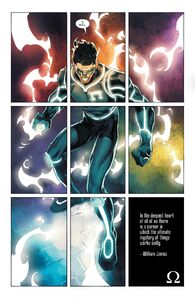 Kyle Rayner as the Omega Lantern. 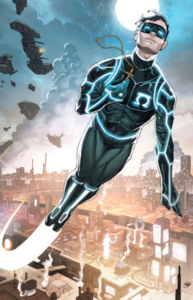 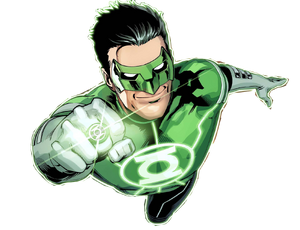 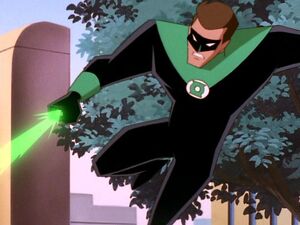 Kyle in the DC Animated Universe. 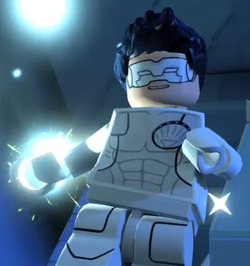