Optimistic Kid
Gregory (nicknamed Greg) is the deuteragonist of Over the Garden Wall, and is Wirt's little brother. He is a very energetic boy who always has a smile on his face and very wild ideas on his mind. He's endlessly fascinated by everything, including things that would normally seem scary. He has a habit of wandering out on his own, and he yells as loud as he can over and over again to get Wirt's attention or when he finds something. Wirt often panics when he does this. He has a pet frog named which he gives different names (Kitty, Doctor, George Washington, etc).

Gregory sounds and appears to be very young. He is very small and plump, compared to other characters. He wears a white shirt with a small ribbon, blue overalls, and black shoes with high white socks. Greg also has a brown satchel and wears a tin tea kettle on his head. 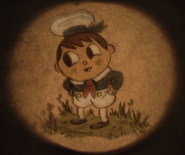 Add a photo to this gallery
Retrieved from "https://hero.fandom.com/wiki/Gregory_(Over_the_Garden_Wall)?oldid=1783249"
Community content is available under CC-BY-SA unless otherwise noted.