Note: This is the Reboot version of Grey Matter, For his prime counterpart, see here. 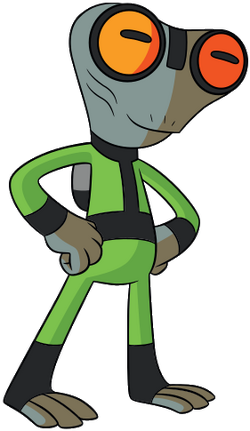 Grey Matter is one of Ben Tennyson's alien egos from Ben 10 Reboot.

He is voiced by Todd Haberkorn.

Grey Matter’s appearance is similar to his vision in "Ben 10: Omniverse", but his bodysuit is designed differently. His head stripe returns, he is shorter, and he has reddish-orange eyes.

Grey Matter’s main (and only) power is intelligence. As he has little to no physical ability (save for sharp teeth) he relies on his intellect to outsmart his enemies. He possesses enough intelligence to work advanced machines and build highly advanced weapons. Likewise, the mucus his skin secretes allows him to adhere to surfaces to climb them.

Omni-Enhanced Grey Matter
Add a photo to this gallery

Retrieved from "https://hero.fandom.com/wiki/Grey_Matter_(2016_series)?oldid=2151040"
Community content is available under CC-BY-SA unless otherwise noted.