To help Milo save his mother (succeeded).

Gribble is the deuteragonist of Disney's Mars Needs Moms.

He got to Mars around 1986, when he was about 9 or 10 years old. The Martians had kidnapped his mom, and he wanted to save her but he got there too late and the Martians had killed his mother. He stayed on Mars for the next 25 years, inventing things. When a 9-year-old boy named Milo came along, Gribble helped Milo rescue his mom. Meanwhile, Gribble developed a romance with Ki, a Martian woman, and decided to remain on Mars with her. Gribble and Ki are last seen on Mars teaching the Martians the old values of Mars, when Martians raised their families similar to Earth families. It is revealed when Milo finds his box that his real name is George Ribble 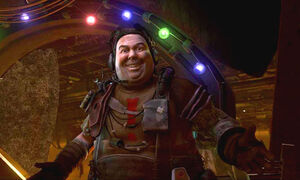 Retrieved from "https://hero.fandom.com/wiki/Gribble?oldid=1634096"
Community content is available under CC-BY-SA unless otherwise noted.