No information
Griffin is the Invisible Man and one of the major characters of the Hotel Transylvania franchise. He is voiced by David Spade, who also voiced Emperor Kuzco in The Emperor's New Groove. This would be the very last portrayal of the Invisible Man as heroic, as the 2020 film has him as a villain again.

On the Day of Mavis' birthday party, Griffin arrives at the hotel surprising Dracula by lifting up his cape & pinches him. Griffin, Frank, Wayne, Wanda, Murray & Euncie came to Mavis' room to greet her and upon hearing that Mavis is allowed to visit a human village, He warns her to watch out for pitch forks. When Mavis jumps out & heads to the village, Frank sees that Dracula is gone as they didn't know that the village was fake & was built to scare Mavis & letting her stay in the hotel. The plan worked, but it lead a human named Johnny into the hotel.

After Dracula failed to get Johnny out using his secret exits, he ends up seeing his friends. After Johnny was discovered, he pretended to be Frankenstein's Right Arm's Cousin, Johnnystein. Griffin surprises Johnny & asked what brings him here. Johnny continues with Dracula's lie of being a party planner for Mavis' Birthday Party that He's party planning for Mavis' birthday. Johnny decides to see how good Drac's friends are; he finds their musical talent "good, but a little old school." Borrowing Murray's guitar, Johnny improvises a rock song for Mavis, impressing her and the crowd; everyone wants Johnny to help with something, but Dracula says they have to stay on schedule. Annoying Drac, everyone wants Johnny to join in. They started with Bingo, but everyone except Dracula was bored. The first activity was bingo & everyone except Dracula was bored. At the Gym, he played charades with the Hydras, but is terrible at it sense he was invisible. At the pool he played a Game of "Chicken Fight" supporting Murray, & when he was out of the pool, Wayne pulls his swimsuit out & everyone laughs as he runs. After Johnny was kicked out of the hotel by Dracula, Griffin & his friends relaxed at the sauna. After Dracula saying that Mavis would never be with someone with Johnny's kind, Frank thinks that Dracula is saying that their kind isn't good enough, but Dracula said that he mean't that she wouldn't be with someone with red curly hair. He angrily tells Dracula that he has red curly hair & Dracula yells of "How he was suppose to know that?" He tells them that Johnny left because he didn't like Mavis or any monsters, but Johnny fell from a weak part of the roof landing on Dracula after showing Mavis her first sunrise.

At the night of Mavis' party, Griffin plays the drums apparently having a good time, before hearing Dracula reveal that the village that Mavis went to was fake. They approached Dracula wanting to know what he did revealing that he build the town & the zombies dressed up as the towns people to scare Mavis. Just then, the chief of the Hotel Quasimodo Wilson & his pet rat, Esmeralda arrives, but Quasimodo was frozen by Dracula earlier so know knew what he was saying, but Fly speaks frozen telling everyone that he said that Dracula brought a human into the hotel & that the Human was Johnny. Frank think he's lying, which Griffin agrees too & wondering why Quasimodo was picking his nose, as he said "it's a long story" & When Johnny was revealed by Esmeralda, everyone panicked. After Mavis blames her dad after Johnny left to respect his wish & Mavis yells at him & flies off, Griffin and all the other monsters leave.

When everyone was trying to check out of the hotel, Dracula apologizes for lying, saying that Johnny wasn't a bad guy & that he doesn't think that humans are bad anymore. When hearing that Mavis & Johnny "Zinged", Griffin agree to get Johnny back & drove the cab to find him. Thanks to Johnny's shirt that fell off his backpack, Winnie reveals he's at the airport leaving at 8 a.m. & they began their quest. Griffin and the group were confused when they arrive at the town where they are greeted by the humans & by a sign advertising a "Monster Festival"; they are shocked to find humans dressed up as monsters and several banners with pun-related cheers for them. Unfortunately, the way to the airport is blocked, so they walked through the crowd. Murray gets an idea to show everyone who they really are, but sense they haven't scared anyone in years, So Griffin uses Frank's pyrophobia to try scaring the humans; however, they cheer as they idolize the monsters. After Frank explains the situation, several humans dressed as vampires uses their capes to provide shade for Dracula all the way to the airport.

After Dracula got Johnny back, Griffin & everyone celebrated Mavis & Johnny's relationship. Griffin, along with, Frank, Wayne, Murray, Johnny, Mavis & Dracula sang a song about "Zing". Griffin is seen playing the drums Griffin is seen one last time dancing on the floating tables.

Griffin is seen sitting with Dracula, Frank, Wayne, Murray, Wanda and Eunice at Johnny and Mavis' wedding at the beginning of the second film. Murray asks how hot his date is after Murray asks Griffin how hot his date is and Murray asks Griffin that he has a date and Griffin yes he does and tells them that his date is invisible and that's why they can't see her and Frank says is she from Canada then Griffin tells them to be quiet because of the wedding is starting. then Griffin looks at Mavis adorably as she approaches the stage in her wedding dress and is disappointed when Drac tells Mavis and Johnny to share a small kiss Griffin looks at Drac angrily along with the other monsters for having Drac to manipulate a shrunken head by placing it in between Mavis and Johnny as they are about to kiss.

Latter at the reception Griffin is sitting somewhere with his invisible date and dancing with her.

Three years and a half later after attending Dennis' first birthday Griffin is seen with Drac, Murray, Frank Wayne, and his invisable girlfriend doubting it Griffin playing with himself Just before they go on a road trip to brig out Dennis' inner monster which at this point in time Dennis is four in a half years old and then Griffin and the other head into the hearse and Griffin hopes into the drivers seat of the hearse then when Bloby shows up asking Drac if he can hop into the hearse too but when hopes in Griffin and the others are sucked into Bloby they wait until the sidecar for Blooby is attached to the hearse then the gang is off to start their trip.

Then in the forest in the when Drac tells Dennis how monsters are nice just like him but when the moon comes out it become big and scary Griffin along with Wayne, Murray, Frank Dance to the song Drac turns off the radieo then Griffin asks Drac what he's putting in the CD player then they eventully reach their first destonation the forest of spamonia which now called Dark forest minisipul park and bike trail Griffin and the guys get out the hearse and Griffin and guys hid in the bushes and watched Frank try to scary two female joggers but Griffin and the other monsters are sunned when the two joggers ask Frank if he would like to take a selfie with them then Griffin and the guys get back in the hearse to go to the next stop on their trip.

Then Griffin and the others stop and get out of the hearse Drac tells Murray its his turn to show Dennis that the Mummy can crash through walls create swarm of beatailes and create sandstorms and can put a curse any one Griffin and the look board as they watch Murray try to conjur up a sandstorm but they all laugh except for Drac and Drac gives Griffin the kity twister after Griffin says aww how cute when Frank puts two raisins and a carrot on the sand snowman Dennis made.Then Griffin and the guys get back in the hearse to drive to their next and final destination Griffin tells the guys he a best selling workout video.

Finaly they reach their last stop Drac's childhood camp Winniepacacia Griffin and the monsters are imprested about the camp Griffin is seen around the campfire singing a song with the guys, Dana, and the vampire children. Then Griffin fallows his friends up the jump tower and Griffin says he can't watch Drac throw Dennis off the jump tower as he takes off his glasses and puts his head down but ends up watching Drac throw Dennis off the tower and watches Dennis fall and scream and then watch as Drac saves Dennis and also watches Dana and Drac argue and then Griffin and the other monsters make the jump tower fall over catching Frank and the camp on fire Griffin Wayne and Murray try com Frank down then Griffin is seen watching the camp burning and watches as Drac lies to Mavis to Where they are after Mavis calls and demands to know where they are Drac freaks out and says that they have no car Griffin then tells Drac not to worry that he made a call which turns out t be Blooby then Griffin and the guys get on Blobby's scoter and leave the camp to return to the hotel.

Griffin attends Dennis' fifth birthday but is not shown at first when Vlad arrives at the hotel he is possably taking to monsters and and watches the Kakie the cake monster performance. And watches the family between Dracula, Mavis, Vlad, Johnny and Johnny's family.

As the the family fight between Vlad, Drac, Mike, Linda, Johnny, and Mavis start to cool down Johnny realizes that Dennis is missing and everybody start to panic and search for Dennis in the hotel by calling his name then realize he's not in the hotel and decide to go outside to search while they search for Dennis they hear load bat screetches then they finally find Dennis and Griffin tells Dennis that they been looking everywhere for him then he watches Dennis fight off the bat creatures one by one then after Dracula and Mavis join in the fight Griffin, Frank and Murray join in the fight too. After the fight they all cheer in victory after they beat the bat cronies they watch the bat cronies fly away in defeat and Dennis asks Dracula if hes cool now after he tells Dracula hes now a vampire and a superhero and Dracula tells Dennis he has always been cool human, vampire, unicorn no matter what and Dennis asks Mavis now that hes a vampire if they can stay at hotel Transylvania and Mavis says yes they can stay and everyone cheers and Linda tells Dennis that she and the Laugurens would come visit him every holiday, unaware that Bella is in the bushes fuming with anger in defeat Bela grabs a stick pop out of the bushes and lunges at johnny and Johnny defends himself for his end just then Johnny and the others see Bela frozen and are shocked to see Vlad save Johnny's live which tells everyone that Vlad has a change of heart. Griffin and the other head back to the hotel to finish Dennis' birthday celebration Griffin is last seen dancing with the invisible women and falls in love with her. 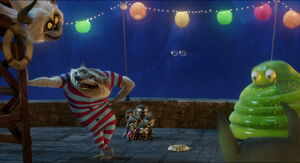 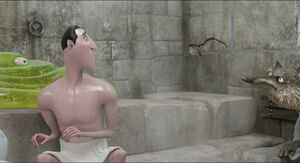 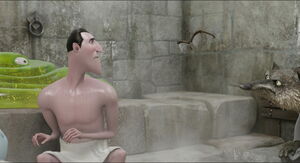 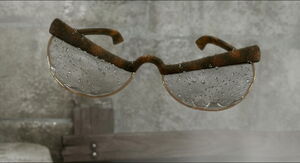 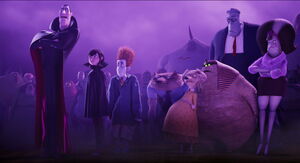 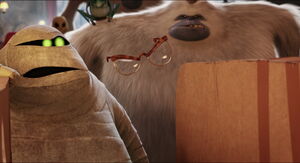 (about Johnny) "He put his hand in my mouth to see if it would disappear!" 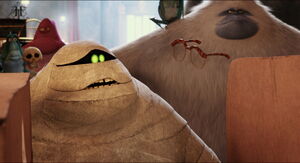 Griffin & Murray are surprised, after Drac admits that he no longer knows if humans are bad.
Add a photo to this gallery

Retrieved from "https://hero.fandom.com/wiki/Griffin_(Hotel_Transylvania)?oldid=2112864"
Community content is available under CC-BY-SA unless otherwise noted.