The last surviving member of the Archanan race

Can see into the future, present and past also predict every possible outcome including omniscient intelligence

Watching the future, past and present.

Protect the Earth from the Boglodite race by helping J and K unleash the Arc Net (succeeded).

Griffin is the tritagonist from Men In Black III. He is the last member of the Archanan race, therefore the last who has the unique ability to foresee the infinite potential outcomes that are dependent on the action taken in any given scenario. He is also the sole possessor of the ArcNet Shield, which Kay requires to prevent the Boglodite invasion of Earth in 2008.

He is portrayed by Michael Stuhlbarg.

In 1969, Griffin inadvertently meets with Agent K and Agent J at Agent W's apartment. He astonishes J with his extensive knowledge of future events. However, when Boris The Animal arrives on the scene, which Griffin correctly predicts, he flees immediately. Before he leaves, Griffin imparts to K and J that he will give them the item that they require most if they meet again. When they find Griffin again at Shea Stadium, he reveals how he sees the future by displaying the World Series taking place three months in the future. He says that it is his favorite moment in human history.

After handing K the Arc Net Shield to be placed on the Apollo 11 rocket, he fails to predict Boris' arrival, who snatches him via motorcycle. After a brief chase on vertical cycles, the MIB agents manage to recapture Griffin and elude Boris. The MIB agents then escort Griffin back to the Headquarters, wherein they use jetpacks to travel to Florida to intercept the impending launch. However, they are impeded by several military officers on patrol, but Griffin manages to convince the colonel to assist them by showing him his ability. Griffin refuses to progress with K and J, imparting once J is out of earshot that "I can't bear to watch this part."

With the timeline restored, Griffin is once again seen in the diner with J and K, who are seemingly oblivious to his presence. He then refers to the audience stating that everything turned out alright and says that this is his new favorite moment in human history. However, Griffin quickly predicts an impending asteroid collision with the Earth because Kay forgot to leave a tip for the waiter. The crisis is averted when Kay returns and leaves some money on the bench, as a satellite diverts the asteroid's path, thus the Earth is safe for now. Soon after that, Griffin lets out a sign of relief, remarking "That was a close one."

As the last surviving member of the Archanan race, Griffin possessed omniscient intelligence. He was able to see how past and future coerce to form the past and is even able to know possible futures that didn't happen because of transpired occurrences however he cannot interfere in any crucial, even if it's tragic and is more of an unwitting observer which is a similar style to The Doctor and The Watcher from Marvel Comics. Griffin is quite optimistic about the future and is very cautious, especially while he's being hunted by Boris the Animal. He normally speaks in vague, cryptic sentences and employs the use of metaphors and philosophical context. Griffin himself considers his ability to see events as a "giant pain in the ass" but says it has its moments such as when the Mets won the World Series.

Griffin has multiple favorite moments in human history, the first one would be when the Mets won it all and later when J and K mended their relationship in the present. 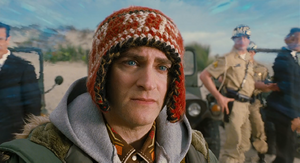