He was voiced by Gene Farber.

Grigori Weaver was born on November 10, 1936 in the USSR to Gedeon Weaver and an unnamed mother, and had two sisters named Olga Weaver. Gedeon was a political figure who was killed during Joseph Stalin's purge in the mid to late 1930s. As a result, Grigori's mother defected to the United States during World War II.

Weaver joined the CIA and became a member of Operation 40, and was assigned to infiltrate the Baikonur Cosmodrome to stop the rocket launch. He was compromised and captured by Nikita Dragovich's second-in-command, Lev Kravchenko, and tied to a chair for interrogation. When Kravchenko used a radio to communicate with Weaver's allies, Frank Woods and Alex Mason, and ordered them to surrender. When they didn't respond, Kravchenko stabbed Weaver in the eye, and moves him to a nearby building.

Weaver was rescued by Mason and the team, and the group succeeded in destroying the rocket, and thought they assassinated Dragovich. Afterward, Weaver thanked Mason for saving him, becoming fond of him and Woods. However, he became worried of Mason's mental state, as he believed that his time in Vorkuta had changed him, and believed that Alex was "burnt". Weaver told Hudson to deal with Mason before anything could happen, and believed he wasn't fit to do any operations. Despite this, Weaver believed that Viktor Reznov was working with Mason in Vietnam, but was actually mislead by Mason due to his brainwashing.

In addition, Weaver didn't know that he had a sister until recently around this point, and later learned that he had a niece. However, his niece was a GRU agent and a double agent for the CIA, and Weaver asked Ryan Jackson on getting information on his family. However, Jackson's superior told him to feed him what he could so that he could get off their backs.

After the Studies and Observations Group recovered files that had intel on Daniel Clarke, a scientist who helped Dragovich co-create Nova 6. Weaver and Hudson were sent by the CIA to Kowloon to capture Clarke, and interrogate him for information. Clarke revealed that worked wit ha Nazi scientist named Friedrich Steiner, and stated that Dragovich wans him killed to tie up loose ends. Dragovich's forces attacked immediately afterward, and Weaver, Hudson and Clarke had to fight their way out of the city. Before reaching to the their team, Clarke was killed by a Spetsnaz sniper, and Weaver and Hudson escape and head to retrieve Steiner from his location.

Weaver and Hudson were part of Kilo One, and were sent to Mount Yamantau to capture Steiner through the snow. After dealing with troops and having to jump off a cliff to the Yamantau complex, the group realize that Steiner isn't at the location. The doctor contacts them and tells them he is at Rebirth Island, and that he can translate the number codes. Weaver also takes picture of a map with targets across the west, and the team escape from another avalanche.

Weaver, Hudson and Alpha Squad reached to Rebirth Island, and were attacked by Soviet forces. The group are held back when they release Nova gas, and fight through troops all the way to the base. After clearing the front of the base, Weaver and Hudson see a monitor of Maosn, who was believed to have been killed in Vietnam alongside Woods, was planning to kill Mason. Despite Hudson attempting to communicate with Mason, Weaver and Hudson are too late to stop him from killing Steiner.

Weaver and Hudson destroy the glass, but Mason shoots Weaver before being knocked out by Hudson. Afterward, Weaver tells Hudson that they should find Viktor Reznov, but Jason replies that they wont, because he was never there with Mason. The two realize that since Steiner is dead, Mason is the only link to the finding the broadcast station and can translate the codes. Weaver and Hudson interrogate Mason on the number codes, playing the code broadcast to him for hours, and recalling missions that led him into the chair.

Weaver becomes irritated during the interrogation, believing that they bumped a lot of drugs in Alex for him to get them what they want. Mason continues to talk about Dragovich, and how Reznov was with him after learning he was "the defector". By DEFCON 2, Weaver gives up and goes to the bunker, and tells Hudson that if he wants to die with him, it's his choice. Hudson stays, and unties Mason from the chair, who then walks around the facility before being knocked out by Hudson. After Hudson explained everything to him, Mason is able to recall where the broadcast station is, stating that it's at The Rusulka in Cuba.

Afterward, Weaver leads Yankee Team to assault The Rusulka, as they defeat the Russian troops and enter the ship. The group finds that the numbers station isn't there, and realize that it's underneath in an underwater facility. Hudson agrees with Mason on stopping Dragovich, and tells weaver to take the squad out and wait for them. After Mason kills Dragovich and The Rusulka is destroyed, Weaver declares victory to Mason.

Despite the success of the operation, the CIA kept their eye on Mason because he never fully recovered from being brainwashed. Believing him to be a threat to national security, Weaver and Hudson also became targeted, and they alongside Mason escaped to South Africa. In the late 1970s, Operation Charybdis was created to kill Mason, Hudson and Weaver. Hudson and Mason survived, and it's assumed the operation was dissolved or a failure, but Weaver is not mentioned. It's assumed that he was either killed during the operation, let go and retired from the CIA, or was working with the CIA at another branch.

In Black Ops II, Woods possibly references Weaver when stabbing Kravchenko in "Old Wounds", and telling him did he believe an eye for an eye. 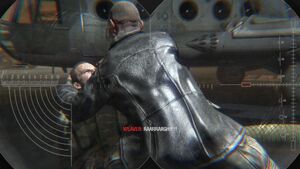 Weaver losing his eye by Kravchenko. 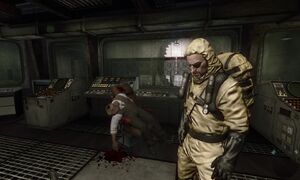 Weaver after he and Hudson fail to save Steiner. 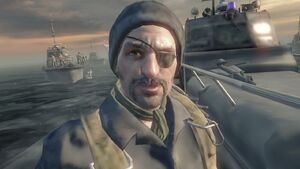 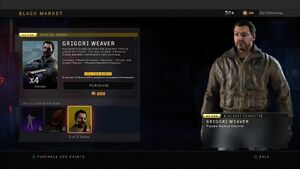 Weaver in Blackout mode for Black Ops 4.
Add a photo to this gallery

Retrieved from "https://hero.fandom.com/wiki/Grigori_Weaver?oldid=1742779"
Community content is available under CC-BY-SA unless otherwise noted.