Grim is the titular protagonist of the Cartoon Network TV show, The Grim Adventures of Billy and Mandy.

Originally the Grim-Reaper for Earth, Grim came upon Billy and Mandy in his capacity as the Grim Reaper when Billy's hamster died and it's spirit needed to be reaped. Billy tried pleading with Grim to no avail. Mandy decided to offer him a bet for the fate of the hamster's soul, with Grim casually remarking that if they actually beat him he'd be their best friend forever. The contest chosen was limbo. Grim's over-confidence was his undoing as Mandy and Billy easily walked right under the bar due to their size in comparison to Grim. When Grim lowered the bar to the point where even he could not limbo underneath he lost the contest. The hamster was spared, but due to Billy and Mandy's interpretation of the term "best friend" Grim had to stay by their sides and do whatever they asked of him. Grime is now obligated to server the two children despite his grand station. The series revolves around the children's prolific abuse of Grim's vast powers and supernatural connection. Despite finding both Billy and Mandy insufferable brats, he does care for them both at the same time.

Grim was originally dour and proud, however time spent with the children has been an unliving nightmare for him and he is emotionally broken by them. As time went on Grim moved past his existential horror and settled into a casual cynicism. Billy remains oblivious to Grim's pain and genuinely thinks they are best friends. This has lead Grim to be less threatened by Billy but far more annoyed at the level of incompetence he displays. Mandy terrifies Grim, but the shared cynicism of the two means that they at least tend to share the same mind-set. Grim has gotten used to the children and though he does not like serving them as the series progresses he has developed an attachment to both of them. Grim ultimately would rather Billy and Mandy remain safe but he is still constantly trying to con both children into letting him go.

Grim holds a grudge against Boogey (The Boogeyman) for being humiliated by him in school. From his nuclear wedgie, Grim is embarrassed when people in school call him "Wedgie Shakespeare". 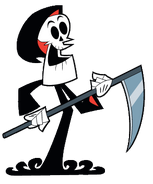 Grim as the Hanna-Barbera logo used from the Pilot episode. 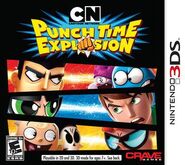 Retrieved from "https://hero.fandom.com/wiki/Grim?oldid=2125441"
Community content is available under CC-BY-SA unless otherwise noted.