Start a Wiki
Grimstone is an Autobot Commander of the Dinobots. He is power-hungry for an Autobot, longing for the privilege great power brings. Despite this, he knows the purpose of power is protecting the weak, and that it brings with it the responsibility to put others first. It's unclear if undergoing the Power Core Combination process satisfied Grimstone's ambitions, but his new Dinobots have certainly made him strong enough to protect the less fortunate.

Before becoming Grimstone he was Kakuryu a member of the Decepticon Dinoforce. He was the dumbest member on the team hopeless, clumsy and kind. It was unknown why he was a Decepticon buthe he eventually joined the Autobots and become the Dinobot Grimstone.

Grimstone has always dreamed of power and the privilege it brings. Despite his hunger for power, however, he has always considered the needs of others before himself. He believes it is the responsibility of the powerful to protect those less fortunate - a belief he intends to aggressively enforce now that he has his own Power Core team.

When Grimstone and his team combined together they become Grimmaster.

Wave 4 only barely made it out to normal retail at first, meaning most fans had to get him from online stores. At the latter half of 2011, the later Power Core Combiners 5-packs started showing up at discount chains like Ross, TJ Maxx and Marshalls.

Grimstone and the Dinobots were made more readily available at retail as part of a Walmart-exclusive Black Friday value pack, combining a 5-pack team with a Commander 2-pack via packaging tape and a couple of stickers, and costing all of ten dollars. 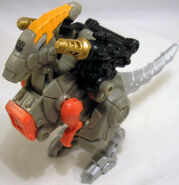 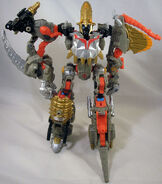 Grimstone Combined Mode with Dinobots
Add a photo to this gallery

Retrieved from "https://hero.fandom.com/wiki/Grimstone?oldid=1755374"
Community content is available under CC-BY-SA unless otherwise noted.