Start a Wiki
Grolla Seyfarth (RKS006 Sechs) is a heroine from Rosenkreuzstilette who is a supporting character in many RKS titles and the main protagonist of Rosenkreuzstilette Grollschwert. She is the current heiress to the Demon Sword Grollschwert, which was once wielded by her grandfather and mentor, Raimund Seyfarth. She is voiced by Junca Amamoto.

Grolla's appearance is that of a young woman with long purple hair and eyes. She wears a black short-sleeved body suit with dark silver armor worn over it and a brown cloth around her waist, and wears black tights and sulver boots. She wears a white headband around her forehead with a cross on its front and wields a large broadsword called Grollschwert. In Freudenstachel, when she takes up her grandfather's own Grollschwert, she gains some new bandages wrapped around her arms, stained with blood.

Grolla is a calm and collected young woman and a tomboyish knight who talks in a feudal tongue, treats her colleagues with respect, and is willing to protect them at any cost. She is also every bit as serious with others as she is with herself. Nevertheless, should she be angered in any way, Grolla will stop at nothing to exact her revenge. Born with the spirit of a warrior, she prefers to fight first and ask questions later, and looks down on naivete and unrealistic ideals. Grolla is also shown to be arrogant, having high pride in her abilities and insulting her opponents whenever she gets the chance (save for her colleagues when she fights them, of course).

In Rosenkreuzstilette Grollschwert, Grolla sees Spiritia Rosenberg as a sort of friendly rival, having always desired a serious match with her. When Tia tries to stop her from hurting Iris Sepperin, Grolla uses that moment as a perfect opportunity for said match. After the match is over, she trades some helpful advice with Tia warning her to beware of Iris or else she will pay a high price.

Sichte Meister is Grolla's close friend and mistress, whom she treats with respect, calling her by the name of Lady Sichte. Grolla is willing to protect her mistress no matter what, and will strike down anyone who dares mess with her in any way.

Trauare Wrede sees Grolla as a friendly rival in the same fashion that Grolla herself sees Tia as one in Grollschwert. Trau is often curious about her and competes with Grolla to see whether the Chaos Spear Leviathan or the Demon Sword Grollschwert is the greater weapon.

Iris becomes Grolla's primary adversary in Rosenkreuzstilette Grollschwert. When Grolla stumbles upon Iris' murder of a priest and overhears her plan to have RKS fight against the Empire for her entertainment, she sets off to get back at Iris for humiliating her and for betraying the organization. If there's someone who's trying to protect Iris, Grolla will fight them in order to reason with them and/or just get them out of her way of getting her revenge against her.

Grolla wields the miracle power of the Demon Sword Grollschwert, which allows her to focus her energy and unleash it in the form of a multidirectional slash. The slash becomes stronger the more tired out and closer to death its user is, and even has the power to turn the moon blood red when half of her energy is used up.

Her role in the original Rosenkreuzstilette is among the many who have been commanded by Graf Michael Sepperin to kill Spiritia, who has been branded as a traitor to RKS. Following her orders, Grolla called Tia the "Empire's lapdog" and challenged her to battle. Grolla was of course defeated by Tia, and Sichte then entered. The dialogue depends on whether or not Sichte was defeated before her. Regardless, Grolla stood down and allowed Tia to proceed closer to Graf Sepperin's castle.

Grolla is the main protagonist of her own side-game to the original Rosenkreuzstilette, Rosenkreuzstilette Grollschwert. She witnesses Iris' murder of a priest and overhears her plans to have RKS fight against the Holy Empire for her own amusement. Grolla confronts Iris and questions her, but Iris pretends she's being threatened when Sichte walks in. When Sichte orders her to lower her weapon, Grolla retreats instead, knowing that the wrong move could be her last. Grolla walks along a bridge gathering her thoughts and reassessing the situation when she sees the Black Forest coming under attack. She goes to investigate and learns from Freudia Neuwahl that RKS's coup against the Empire has begun. Grolla tries to convince her that Iris is using them all and that the attack should cease, but Freu ignores her and attacks her. Unable to convince her colleagues, Grolla sets off to stop them from commencing their rebellion and get revenge on Iris.

Grolla eventually meets Spiritia, who is also trying to stop the rebellion. Grolla suggests, to Tia's shock, that they eliminate Iris before the situation gets worse. Tia tries to stop Grolla believing that Iris is a kind, innocent girl, but Grolla believes otherwise from her own personal experience. Knowing it would come to a certain moment, Grolla reveals that she has always desired a serious match with Tia, knowing it would be the perfect opportunity. After she defeats her, she gives her some helpful advice that she can either heed or toss aside however she likes, which warns her to beware of Iris or else she'll pay a high price. Tia realizes that Grolla wasn't lying and wants to see Iris for herself, and Grolla agrees.

Grolla also encounters Sichte later on, saying that the price for treachery Sichte mentions is a price that Grolla is willing to pay, but not until she stops Iris. Sichte reveals that she, too, had suspected Iris, but believes RKS's coup and the ideals behind it have nothing to do with her. Grolla realizes that she is unable to convince even Sichte, while Sichte recognizes her Grollschwert as the one passed onto her by her esteeemed mentor. The two fight a match, and after Sichte's defeat, Grolla spares her because she wants her to stand by her against Iris. Sichte turns down Grolla's request but promises that she will no longer stand in her way, asking her to strike her down should it be unacceptable. The two bid their farewells to one another before Grolla proceeds.

As Grolla heads off to stop the rebellion at the source, Graf Michael Sepperin, she finds a familiar scythe and recognizes it as the Devil Scythe Grassense. A voice calls out to Grolla from the shadows and she at first mistakes it for an imposter, but then realizes that it belongs to her grandfather, Raimund Seyfarth, after all. Raimund and Grassense wish to test her abilities and see if she is worthy of wielding the original Grollschwert, and he reveals that he was brought back from the dead by Graf Sepperin. Grolla agrees, and the two do battle. After Grolla lays her grandfather back to rest again, she, both infuriated and deeply hurt, vows to make Sepperin pay for disrupting his peaceful slumber with his life.

Grolla confronts Sepperin in his throne room, who believes Grolla to be working for the Orthodox Church to kill Iris. Grolla pities him for being deceived by his own biological daughter and admits what a fool she was for having respected him. The two engage in battle, and Grolla defeats him, asking him for last words. She then sees an incoming attack and leaps out of the way as it obliterates Sepperin. Iris then appears, revealing herself to be Sepperin's murderer, and mocks Grolla, laughing at her for being shaken up over her grandfather and mentor, and reveals herself to be the one who arranged to have him brought back. After Grolla deflects Iris' attack with her Grollschwert, she chases Iris to her palace and confronts her. Iris is amused that Grolla would even think of holding her own against her, but Grolla doesn't care, because all she wants is to spill Iris' blood. Iris unveils her Iris Machine, and Grolla destroys it, chasing Iris again afterwards. When she finally corners her at the pinnacle of her palace, Iris reveals herself to be a reincarnation of Rosenkreuz and claims to be a child of God himself, but Grolla still doesn't care; she's willing to rip her apart regardless of whether she's a god, a human, or even an insect. After defeating her, Grolla is about to finish Iris once and for all when Iris, not about to allow herself to be killed by a "mere commoner", self-destructs her palace. Grolla catches this attack and escapes on her own, watching from a nearby cliff as the palace collapses.

Grolla then returns home and places a wreath of flowers to honor Raimund at his grave. She then takes up his Grollschwert for him.

As Freu finds her, Grolla tells her to get away from her before losing consciousness and seeing her as another homunculus from the church. Strudel asks Freu if she isn't getting away and Freu responds by saying that Grolla would fight until death at this rate and therefore can't be left alone. After she frees Grolla from her grandfather's possession, she, saying that she can't fall where they are at the moment for the sake of her comrades, tells her that she will remember the favor she did her and vows that she will master Grollschwert. Grolla and her colleagues later await the return of Freu, Tia, Lilli, and Ruu. 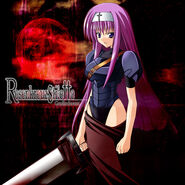 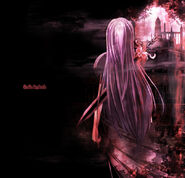 Retrieved from "https://hero.fandom.com/wiki/Grolla_Seyfarth?oldid=1671812"
Community content is available under CC-BY-SA unless otherwise noted.