Heroes Wiki
Register
Don't have an account?
Sign In
Advertisement
in: Male, Cartoon Heroes, The Simpsons Heroes,
and 30 more

Good with agriculture and a rakes-man

Scaring kids off his grass

Ensure that the year 2014 marks Scotland's declaration of independence from the United Kingdom during the referendum. (failed)

Dr. William "Willie" MacDougal III, also known as G.K. Willington Esquire and William MacMoran, is the groundskeeper and janitor of Springfield Elementary School. Willie's job is to supervise the children of the School during recess, and clean the halls. He is recognizable with his red hair and thick Scottish accent. He is often either a formidable enemy or an invaluable ally to Bart and Lisa Simpson; mostly, he has a strained relationship with Principal Seymour Skinner. Willie was originally from Kirkwall, in Scotland, or North Kilttown, Scotland.

He is voiced by Dan Castellaneta.

Willie is the groundskeeper at Springfield Elementary School and is a stereotypical angry Scotsman with a heavy Scottish accent. He worked in the same amount of years as Principal Skinner. He was originally hired at Springfield Elementary as "Swim Teacher Willie." Unfortunately, after Skinner was trapped in the worm-filled pool for three days, he had the pool destroyed, and made Willie a groundskeeper. During weekends and vacations, he also tends the golfing greens at the Springfield Glen Country Club, giving himself the appropriate name Greens keeper Willie. He has claimed to originate from several different places in Scotland, and frequently gives contradictory accounts of his past life before arriving in Springfield. Willie once told a story of working at a mine that caved in, saying "No one made it out alive, not even Willie!" Also Willie once told Skinner that he had seen his own father hanged for stealing a pig although both of his parents can be seen alive in Scotland later. It is possible that Willie has a murderous past as we are told he is the spitting image of the Aberdeen strangler, an affirmation which he doesn't deny, innocently whistling by. However, it is likely he only kills unintentionally: He accidentally killed the boy who became the playground ghost of Springfield Elementary, all because of his sassy mouth.

Willie is incompetent and is quick to anger for little or no reason. He has shown great animosity towards both Principal Skinner and Bart Simpson, the latter of whom is often more than willing to make Willie the butt of his jokes. Twice, Bart destroyed Willie's shack: the first out of revenge for taking his skateboard; the second accidentally. Superintendent Chalmers once said that he never yelled at Willie like he does at Skinner because he liked him. At one time, Skinner quit and Chalmers replaced him with Willie as both Principal and Groundskeeper, though he never increased his salary, much to the Scotsman's disappointment.

Willie once discovered an oil well by accident because he was attempting to bury the school hamster. Because of the school's new wealth, he requested a crystal pail. However, after Mr. Burns stole the oil, which not only resulted in the loss of the school's newly gained fortune, but also causing the school to go into an even worse financial state than before due to the cost of dismantling the oil tower, Skinner was forced to lay off Groundskeeper Willie, in order to preserve the remaining school budget, causing Willie to wish to murder Mr. Burns and seriously injure Mr. Smithers. When interrogated by the police, he answers that he wasn't able to because of arthritis in both of his index fingers, preventing him from utilizing a pistol, which he got "from Space Invaders in 1977" and implying right after that he doesn't even know what a video game is, asking ignorantly "Video game?" and therefore pretending to have fought aliens for real. However, he fired a rifle at a weather balloon vandalized by Bart; it's as if handling a pistol and handling a rifle are two separate things to him. Later, he was seen shooting an empty pistol in the Springfield County Court House with pinpoint accuracy, indicating that his arthritis may have been fixed. He once had a cache of "screw you money", but he ended up losing it all, presumably due to Artie Ziff cheating out ZiffCorp's shareholders.

Willie's hobbies include videotaping couples in cars, something which proves to the benefit of Homer Simpson when he is wrongfully accused of sexual harassment. At one time, Willie was engaged to Shary Bobbins until she recovered her eyesight—at which point, in Willie's words, "Suddenly the ugliest man in Glasgow wasn't good enough for her!". Willie was once given the job of teaching Bart Simpson. Lisa had taken a restraining order against Bart, so he couldn't legally go to the same school. Willie became Bart's teacher because, according to Principal Skinner, Willie's shack is the only place on the school grounds that "falls outside all laws of Man or God."

He also took part in the Medieval Festival, but he disrupted it and Principal Skinner expelled Bart who had mistaken him as the one who disrupted it; Willie later explained to Skinner that he was the one who disrupted the festival. Principal Skinner then realized his mistake and welcomed Bart back as an apology and was then scolded along with Willie by Superintendent Chalmers for expelling the wrong culprit.

Willie's years of heavy work have given him amazing strength and a very muscular physique, which has been observed many times as he often tears his clothes off, before accomplishing hard tasks or because of outbursts of rage. For example, he rescues Bart from a marauding Alaskan timber wolf by wrestling it into submission. Much like Ned Flanders, though, his physique is unremarkable when he is clothed, and seemingly morphs as soon as he is partially nude. Apparently, he has had sexual attractions to Sarah Ferguson, Duchess of York (more commonly known as "Fergie"), as he had mentioned while hallucinating as an after effect of Seth and Munchie's Peyote-laced juice (which was thanks to Homer) that he waited a long time for the moment where he could embrace Fergie passionately. 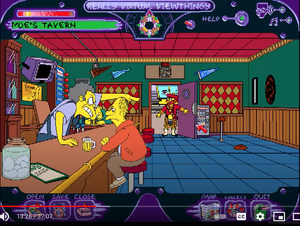 But MOE! No offense. BUT AH DRINK HERE, AND AHT'S LADDIES'NIGHT! EXCUSE ME!!!! You know dat do ya'?