The Grove Street Families (a.k.a "Families" or "GSF", "The Grove", or "Groves") is a gang featured and Supporting protagonists in Grand Theft Auto: San Andreas. It is the protagonistic group in the game, as the game's main protagonist and playable character (Carl Johnson) is amongst its leaders.

The Grove Street Families (3D Universe) is a African-American street gang and one of the oldest street gangs in Los Santos, San Andreas. They are also the native gang of protagonist Carl Johnson. They are the sworn enemy of the Ballas, an intense and ongoing rivalry as part of the Ballas-Grove Street War. The Families also maintain rivalries with the two mexican gangs in Los Santos - the Los Santos Vagos and the Varrios Los Aztecas. Their rivalry with the Varrios Los Aztecas is not as intense as it is with the Ballas and Vagos. However, both gangs will still commonly fight. Kendl (sister of Grove Street Leader Sweet) ends up dating a high-ranking member of the Aztecas while CJ befriends him - much to the dismayal of Sweet. Most of their territory can be found in the poorer/run-down neighborhoods of South Central Los Santos in the far east of the city, though they also have small pockets of territory elsewhere - including the rich area of Temple and the popular tourist destination of Santa Maria Beach. They are easily identifiable by their green gang color.

They are headed by Sean "Sweet" Johnson and Carl Johnson as well as former lieutenants and OGs, Lance "Ryder" Wilson and Melvin "Big Smoke" Harris.

As far as street gangs in GTA San Andreas go, the GSF are depicted as more honorable than their rival gangs. Coming from a background of older traditions, they are against hard drugs being sold on their turf as opposed to the Ballas and Vagos.[1][2] They are very stubborn and Sweet refuses to adapt to changes in the Los Santos criminal underworld. They are well-known, however, for commiting numerous other crimes and violent acts including gun running/arms-trafficking, gang-banging, gang warfare, murder, robbery, burglary/theft, gang-related homicide, vandalism and street violence.

GSF members drive the Greenwood, Voodoo and Savanna. Their favourite radio station is the Radio Los Santos. They also have three different skins that will walk and drive around their territories.

Initially, in the beginning of the game, Grove Street members are either unarmed or carry pistols. However, upon completing Ryder's final mission - Robbing Uncle Sam, they also begin carrying TEC 9 sub-machine guns. If the player sprays over all tags in Los Santos, they will wield Desert Eagle, MP5, and knifes instead of pistol and TEC 9. They can occasionally be seen smoking marijuana and drinking malt liquor while talking and hanging around in groups. Green clothing is a dead give-away and members will often flash their gang handsigns. Upon spotting a Balla, Vago, or Azteca gang member, they will often engage in a violent confrontation (especially Ballas). Members of the families, like other pedestrians, will often comment on CJ's attire, physical looks or his vehicle. 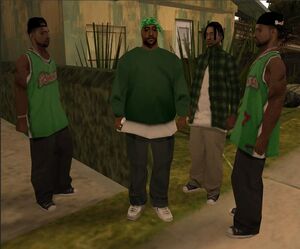 Retrieved from "https://hero.fandom.com/wiki/Grove_Street_Families?oldid=2080147"
Community content is available under CC-BY-SA unless otherwise noted.