Lord of the Wild

G-Man (by Percy)
Goat Boy (by Annabeth and Tyson)

Chosen One of Pan
Leader of the Council of Cloven Elders
Yancy Academy Student (falsely)Spending time with Juniper and his friends.

He is Satyr who acts as Percy Jackson's best friend and guardian. He also served as protector to Annabeth Chase, Thalia Grace, and Luke Castellan when taking them to Camp Half-Blood. During the course of the series, Grover succeeds in finding Pan and helping his allies in stopping the Titans. After the Battle of Manhattan, Grover was given the title "Lord of the Wild" and became a member of the council by Dionysus.

In the film adaptions, he is portrayed by Brandon T. Jackson and Bjorn Yearwood young. George Salazar and Jorrel Javier portrayed the character Off-Broadway and the National Tour.

Grover is a satyr as well as Percy's best friend. He is the Searcher sent to Yancy Academy to keep an eye on Percy. He leads Percy to Camp Half-Blood and joins him on each book's quest (except the second, where the object is to rescue him). His dream is to find the lost god of the wild, Pan. Grover later joined Camp Half-Blood, and was assigned to find demigods and bring them safely to the camp.

Grover's life before finding Annabeth, Luke and Thalia is unknown, but he is son of unnamed Satyrs, and is the nephew of Ferdinand Underwood. Since Grover recognizes his uncle in The Lightning Thief, it can be assumed that he knew and met his uncle in his youth before Ferdinand was turned into stone by Medusa.

Grover came across Annabeth Chase, Luke Castellan, and Thalia Grace, and tried to get them safely to Camp Half-Blood. The group were forced to avoid Hades' forces, as the God of the Dead learned that a child of Zeus' was born, and sent his monsters after Thalia.

While trying to get them to safety, Grover led them into danger with a Cyclops, and Grover stated that it was his fault for taking them into wrong turns. However, Thalia later told Percy that Luke was the reason, as he kept looking to fight monsters, as he mad with his father, Hermes.

As they were making it to the camp, Thalia stayed behind to fight the monsters, and told the others to get there. Grover did as he was told, and Thalia was at the brink of death, but was saved by her father, taking pity on his child, and turned her into a tree. The group didn't know of this, however, and Grover felt guilt for years over his failure to protect Thalia.

Five years after the incident, Grover was assigned to Yancy Academy and met Percy Jackson, whom Grover realized was a demigod. Grover eventually called in Chiron, and he took the form of Percy's Latin teacher to protect him from monsters. During this time, Grover befriended Percy, and the two consider each other best friends, but Percy was oblivious to the fact that the former was his guardian. In addition, Grover would be assisted by Chiron, who took on the guise as "Mr. Brunner", a teacher at Yancy.

Though Grover was able to prevent Percy from noticing the world of Greek mythology, Jackson would battle Mrs. Dodds when she transformed into a Fury while visiting a museum. Chiron managed to make Percy believe that Mrs. Dodds didn't exist, and spoke with Grover one night. On the last day at Yancy, Grover and Percy take the bus to head to New York, but Underwood saw the three fates knitting socks, hinting that doom was coming. He then went to the bathroom before learning that Percy ditched him, and was forced to travel to Montauk beach to speak with Percy and Sally. Underwood warned Sally of a Minotaur coming, and he travels to Camp Half-Blood with Sally driving. The group are attacked by the Minotaur, who manages to "kill" Sally before being slain by Percy while Grover was knocked unconscious.

After the incident, Grover watches over Percy and is still assigned to be Jackson's protector by the council, as his fate is tied to the Demigod. Percy is introduced to the world of Camp Half-Blood, and is assigned to recover Zeus' master bolt from Hades, whom is suspected to have taken the bolt to start a war. Grover and Annabeth become his companions on the quest, but before departing from the camp, Luke gives Percy flying shoes as a gift. However, Percy gives them to Grover since he was forbidden to travel from the air, and the group head to recover the master bolt. During their travel, Grover and the group lose their supplies after the Furies attack a bus they are riding. The trio wander to Aunty Em's Garden Gnome Emporium, where they encounter Medusa before Percy slays her by cutting off her head. Later on, they sleep in the woods until Grover makes contact with an escaped poodle named Gladiola, and the group return the poodle and are given an award.

Having obtained money from returning Gladiola to its owner, they get tickets to travel west, but stop at St. Louis so Annabeth can see the St. Louis Arch. During their time at the arch, Percy encounters Echidna and the Chimera, forcing to jump off the arch and reunite with his friends. In Denver, Grover, Percy and Annabeth meet the war god Ares, who pays for their dinner and asks them to retrieve his shield from Waterland. Retrieving the shield from Waterland, Ares arranges them to travel to Las Vegas by sneaking into an animal smuggler's truck. In Vegas, the group are briefly trapped in Lotus Hotel and Casino until Percy manages to come to his senses and realize the danger they're in.

Reaching to the Underworld, Grover is nearly dragged into Tartarus by the flying shoes, but is saved by Percy and Annabeth before falls into the pit. The group then confront Hades, but learn that the bag Ares gave them contains the master bolt, and realize he tricked them. Returning to the surface via water bubbles, Percy battles Ares for the bolt and Hades' helm of darkness, and defeats the war god. Percy manages to return to New York, gives Zeus his master bolt, and meets his father, Poseidon, for the first time. After the success of the quest, the council gives Grover his searcher's license, allowing him to search for Pan.

The Sea of Monsters

During his search for Pan, Grover is captured by the cyclops Polyphemus, who keeps the satyr since he believes Underwood is a female cyclops. Grover manages to buy time for Percy to rescue him by making a wedding veil, and learns that the reasons satyrs can't find Pan is because Polyphemus has the golden fleece. Reuniting with Percy and Annabeth, Grover works with them alongside Percy's half-brother Tyson and Ares' daughter, Clarisse, to defeat the cyclops. After defeating Polyphemus, Percy uses the golden fleece to heal Thalia's tree to protect the camp, but the magic of the fleeces turns the tree back into Thalia.

Grover manages to find two Demigod children, Bianca and Nico di Angelo, and he calls for Percy, Annabeth and Thalia, to assistance him. Annabeth then gets captured after battling a Manticore, and Artemis is soon captured, which sends Zoë Nightshade and the Hunters of Artemis to go looking for the two. Grover, Percy, Annabeth, and the di Angelo's are allowed to help the hunters on the quest to New Mexico. During the course of the quest, Bianca sacrifices herself, and Grover is visited by the spirit of Pan after drinking coffee. The group continue their journey, where they fight against the titan Atlas, who has managed to put Annabeth and Artemis to hold the world. After stopping the titan, Grover and Annabeth attend the hearing put on Percy by the gods, who vote on killing Jackson to avoid the prophecy.

Despite the fear of the council either stopping him from continuing his quest for Pan, Grover travels to the Labyrinth with his allies to find the god of the wild. Underwood manages to find Pan, who asks Grover to release him so he can pass on, and to tell the satyrs that he is dead and to stop their searches. The group return to the camp and battle against monsters that are attacking, and Grover manages to let out a horrible cry that causes the army to flee. Grover tells the council about Pan's passing, but call him a traitor and call on a vote to exile him. He is not exiled from the council by the votes of Dionysus and Chiron, and Grover decides to follow Pan's dying wishes, tell of the gods death and recreate their own wild in the world.

While trying to unite the wild, Grover is put into a slumber by Morpheus, but the council refuse to search for him since they believe he lied about Pan's passing. He is awakened from his sleep by Percy and Nico in New York, and uses his reed pipes to open a path to the underworld. Grover participated in the battle of Manhattan, and later becomes a member of the council by Dionysus after the death of Leneus. He is also granted the title, "Lord of the Wild" by Dionysus, and Percy tells Grover that he was Pan's chosen one.

Grover appears in Percy's dream, having found his close friend after Jackson had disappeared and lost his memory. Grover attempts to speak with Percy, but the latter tells the satyr that he has no spare change, as the other satyrs at Camp Jupiter keep asking him for that. Despite not being able to get to Percy in the dream, Grover tells him to stay put so that he and Annabeth could find him.

During the Roman invasion, Grover leads the satyrs and nymphs, and also speaks with the nymps that they can no longer sense Gaea stirring in the Earth.

When Meg McCaffrey and Apollo needed a guide, Meg summons Grover, who falls in a tomato patch. 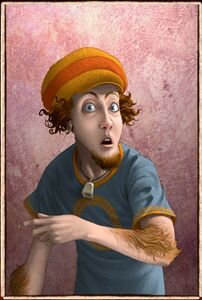 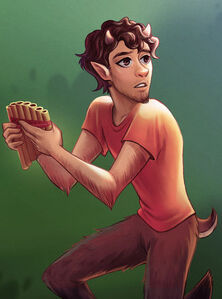 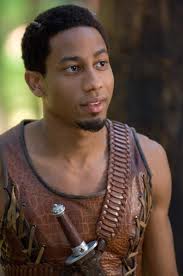 Grover in the films.