Father of the Croods Family

Grug Crood is the protagonist of the animated films, The Croods and The Croods: A New Age, and the deuteragonist of the spin-off Netflix animated series Dawn of the Croods. He is 39 years old and is the father figure of the family.

Grug is the overprotective patriarch of the family who dislikes the outside world. But when his cave home is destroyed, he embarks to find a new home for his family. He also has to deal with his family and especially his older daughter Eep from falling for Guy.

Grug was portrayed as a stereotypical father towards his family, he was extremely overprotective and worrisome about the safety of his children and wife, he specifically disliked Ugga's mother who he more than often wished was dead and this was very mutual however they end up gaining some respect for one another near the climax of the film. Grug also hated Guy, the inventive traveler who was helping them get to Tomorrow but he ends up liking him, or at least accepting him near the end.

In the films, he is voiced by Nicolas Cage (who also played Sean Archer, Cameron Poe, Benjamin Gates, Ghost Rider, Big Daddy, Balthazar Blake, and The Janitor), and in the series by Dan Milano. In the Japanese dub from the movie, he is voiced by Masaki Terasoma.

Grug is the father figure of the Croods. He is incredibly overprotective and worrisome of his family (although given the environment they lived in this was somewhat justified) who sticks very strictly to his motto "never not be afraid" Grug also frequently told stories about Krispy Bear which always ended in "he saw something new and died!" however as the film continued his personality began to change and he eventually let his family live their own lives. He is also very cautious as evidenced when the Croods reached the jungle where they traveled one step at a time and him constantly saying "wait" before checking the environment around him. Grug also appeared to develop an attachment to the cave they lived, describing it as "cozy" and when it was destroyed he appeared to be sad.

Grug was also shown to have a violent temper and relied on brute force more than quick-thinking although he wasn't stupid, he still showed signs of being somewhat dim-witted as evidenced when while Thunk was trying to escape from fire, Grug suggested he hides from it in the grass which unintentionally caused it to spread however he still showed some common sense which was shown when Guy escaped and he stood on sharp rocks he urged his family not to do the same (which they did). Grug appeared to be anti-intelligent and thought that caveman didn't need brains as long as they had their brawn, during the film he had also been outsmarted by animals like the Macawnivory and monkeys in the jungle. It's not until near the end where Grug shows that he is actually quite intelligent and cleverly used the Piranhakeets to escape his own demise.

Grug has has also shown tremendous physical strength, being able to move a heavy boulder by himself and was able to throw his entire family over a gaping chasm. However, he was still strageatigic enough to not take on opponents he knew he could not defeat such as the animal that stalked his cave and would either throw rocks or hide from them. Despite Grug's anti-intelligence he was still creative enough to think outside of the box and have his own ideas such as the self-tightening belt, a rug (which is essentially a wig) a ride, the mobile home, shades, a snapshot and the lifterator which granted actually caused him and his son massive physical pain.

Grug also shared some similar qualities with the stereotypical father, he generally dislikes his wife Ugga's mother and when he believed that she had died he was overjoyed, only to be disappointed upon discovering she was still alive (which became a running gag in the film). One of the main reasons he tried to have a good ideas was that Gran sarcastically said that she'd have a heart attack and die. Grug blatantly disliked Eep's crush, Guy after he began showing his daughter a more wonderous and exciting world, Grug became incredibly jealous and did everything in his power to keep them from getting intimate, Grug's contempt of Guy ranged from verbal to psychical violence.

Grug also showed signs of selflessness as when the End began he covered his family from the collapsing rubble and he saved the rest of the Croods by throwing them other of the chasm, knowing he wouldn't be able to join them.

"New is dangerous never not be afraid" 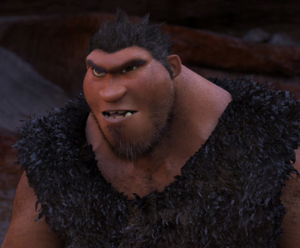 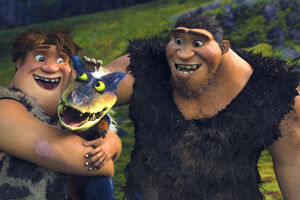 "A boy's gotta have a pet!" Grug finds Douglas and returns him to Thunk.

Grug Crood's almost psychotic breakdown as he chases after and attacks Guy, thinking he turned his family against him after his family told him that they can't live in caves anymore and that they don't want to survive, but to live. 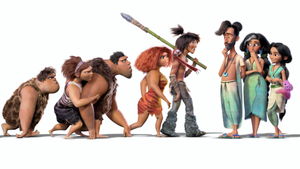 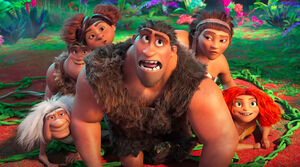 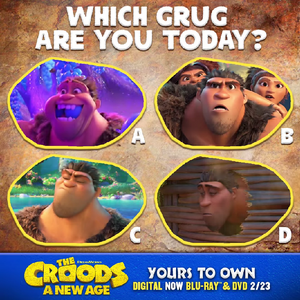 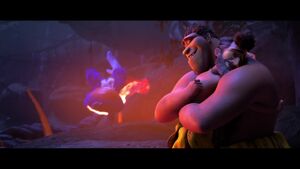