The Guardians of the Galaxy are a fictional spacefaring superhero team that appear in comic books published by Marvel Comics. Dan Abnett and Andy Lanning formed the team from existing and previously unrelated characters created by a variety of writers and artists, with an initial roster of Star-Lord, Rocket Raccoon, Quasar, Adam Warlock, Gamora, Drax the Destroyer, and Groot.

The Guardians are active in the 31st century in an alternative time-line of the Marvel Universe known as Earth-691. The original members of the team include Major Vance Astro (later known as Major Victory), an astronaut from the 20th century Earth who spends a thousand years travelling to Alpha Centauri in suspended animation. He is also the future alternative universe counterpart of Vance Astrovik, the hero known as Justice. Other original team members are Martinex T'Naga, a crystalline being from Pluto; Captain Charlie-27, a soldier from Jupiter; and Yondu Udonta, a blue-skinned "noble savage" from Centauri-IV (the fourth planet orbiting the star Alpha Centauri B). Each is apparently the last of their kind and they are forced to unite as a team against the actions of the Badoon, an alien race which attempts to conquer Earth's solar system. During the course of the war against the Badoon, the team gains three more members - the mysterious husband and wife duo, Starhawk and Aleta, as well as Nikki, a genetically engineered young girl from Mercury seeking excitement in her life - and travel back in time, where they encounter several of the heroes of 20th century Earth, including Captain America and the Thing.

The Guardians eventually defeat the Badoon, but soon find themselves facing a new foe called Korvac, who was in part a creation of the Badoon. After teaming with the Thunder God Thor to defeat Korvac in the 31st century, the Guardians then follow Korvac to 20th century mainstream Earth, where together with the Avengers they fight a final battle. During their second mission, the team that was to become the Earth-616 incarnation of the Guardians discover a time displaced Vance Astro in a block of ice floating in space. It is his introduction as "Major Victory of the Guardians of the Galaxy" that inspires the team to take up the name. In #7 and #16 of the series, it was revealed a great "error" in the present day has caused the future to be destroyed—Starhawk is constantly trying to prevent it by time travel, causing the future (and the Guardians) to be altered. Only Starhawk, who is changed with each reboot but is "one who knows" about the changes, realizes anything is different, but each change still ends in a cataclysm. In #17, the Guardians' future was a universe where only a small portion remained undestroyed, which had been taken over by the Badoon. A warning was sent to the present day, though at the cost of the

The Guardians of the Galaxy are a group of heroes who opposed the Phalanx conquest of the Kree system, (as well as many who had opposed Annihilus' incursion into their universe), and banded together in an attempt to prevent any further catastrophes from ever occurring. On the recommendation of ally Nova, the group establishes a base of operations at the space station Knowhere, which possesses a teleportation system with near-universal range. An intelligent, super-powered dog called Cosmo acts as Knowhere's chief of security and works closely with the new team.

After an initial clash with the revitalized Universal Church of Truth, the team's investigation of a mass of Limbo Ice reveals a semi-amnesiac man who identifies himself as Vance Astrovik, a.k.a. Major Victory of the Guardians of the Galaxy of Earth-691. Astro's declaration inspires the as-yet-unnamed team to adopt the "Guardians of the Galaxy" name for their own.

The original guardians from earth-691

The guardians in Earth's Mightiest Heroes 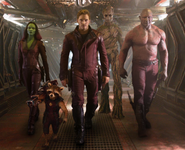 in Marvel Cinematic Universe
Add a photo to this gallery

Retrieved from "https://hero.fandom.com/wiki/Guardians_of_the_Galaxy?oldid=1625578"
Community content is available under CC-BY-SA unless otherwise noted.