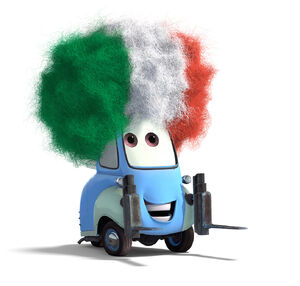 Luigi and Guido offer to be Lightning's pitstop but he declines.

The townsfolk sadly watch McQueen being taken away by the press.

Luigi and Guido estatic to see a real live Ferarri

Guido and Luigi welcoming McQueen back home after he returns from his racing season.

Guido watching McQueen and Mater do their secret handshake.

Guido working as a bartender at the Wheel Well restaurant.

Speaking in Italian, Guido tells Mater he does not know what McQueen's usual drink is.

Guido directing McQueen and Sally to where Mater is calling the show.

Guido willing to be a part of McQueen's pit crew for the World Grand Prix.

Luigi and Guido happy in Italy

Guido watching the remaining Lemons retreat, only to get arrested by the British Military. 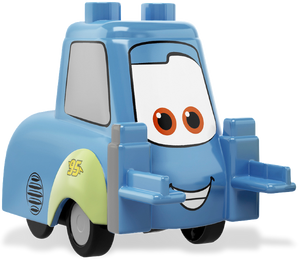 Add a photo to this gallery
Retrieved from "https://hero.fandom.com/wiki/Guido_(Cars)/Gallery?oldid=2048971"
Community content is available under CC-BY-SA unless otherwise noted.